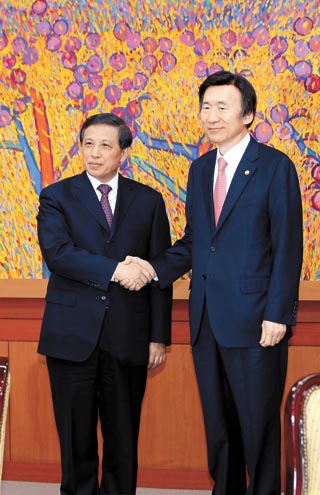 The Chinese vice foreign minister again expressed Beijing’s opposition to the deployment of the U.S.-led Terminal High Altitude Area Defense (Thaad) system on the Korean Peninsula, a move which could potentially strain diplomatic tensions between the neighbors, during talks with his South Korean counterpart Tuesday.

“We exchanged views on the Thaad issue,” Zhang told reporters afterward, adding that China “expressed opposition” to the deployment of the battery on South Korea.

“We hope the relevant sides will act prudently,” he added.

China has consistently been wary of the placement of the U.S. antiballistic missile system in South Korea, which comes with a powerful radar system that can cover more than 1,000 kilometers (621 miles). Its placement on the Korean Peninsula has been protested by both China and Russia, who have expressed concerns that the radar could be used as a possible method of surveillance against them.

China is especially sensitive toward the AN/TPY-2, a high-resolution, rapidly deployable X-Band radar designed to detect, track and identify ballistic missile threats at long distances and at very high altitudes for the Thaad system. The mobile X-Band radar can scan the horizon for hostile missiles up to a maximum range of 2,000 kilometers.

On Monday, Chinese Foreign Ministry spokesman Hong Lei said in a briefing, “The coverage of the Thaad missile defense system, especially the monitoring range of its X-band radar, goes far beyond the defense needs of the Korean Peninsula and will reach deep into the Asian hinterland.”

He added that China “firmly opposes any countries’ attempt to infringe on China‘s strategic security interests with the excuse of the Korean Peninsula nuclear issue.”

“We explained the Thaad issue and the measures our government took in response to the nuclear and missile threat,” a Korean Foreign Ministry official said of the talks. “The Chinese side said they understood the background and concerns that led to such decisions.”

He added the Chinese diplomat also asked for Seoul to respect Beijing’s position.

Zhang however did not make any particular remarks on Seoul’s decision to shut down the inter-Korean Kaesong Industrial Complex one week ago.