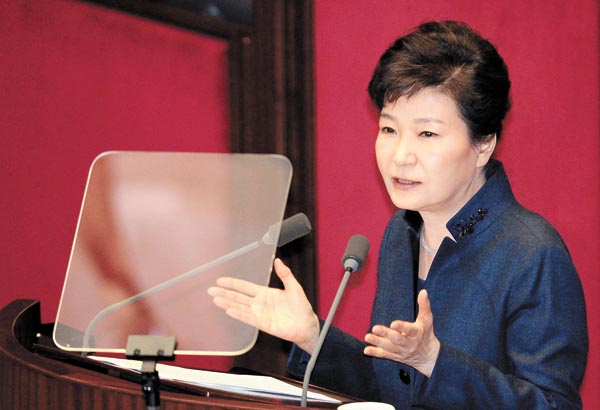 President Park Geun-hye addresses the National Assembly on Tuesday. In her nationally televised speech, she declared a switch in the South Korean government’s policy toward North Korea that would focus on terminating its nuclear ambitions. [NEWSIS]

In a departure from her previous key policy regarding trust-building on the peninsula, President Park Geun-hye switched gears Tuesday in her speech before the National Assembly, calling for North Korea to abandon its weapons programs.

Park warned that the Kim Jong-un regime would only speed along its “collapse” if it did not abandon its nuclear development aims.

The president’s remarks, which were televised nationally, made clear the government’s resolve to step away from its long-held policy aimed at building inter-Korean trust, a plan that was originally outlined as a way to lay the groundwork for peaceful unification and work toward denuclearizing Pyongyang.

“We can no longer be dragged along by North Korea’s deceit and threats,” Park said, adding that South Korea would no longer bow down to provocations by Pyongyang. 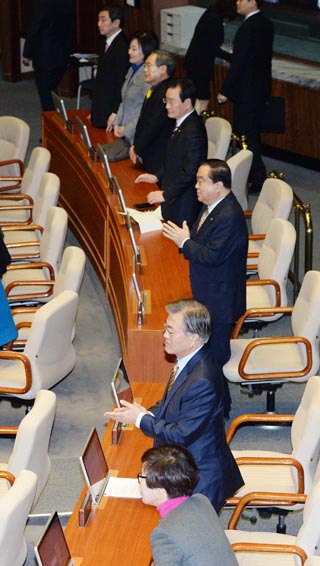 Her address was the first concerning security issues on the peninsula following North Korea’s fourth nuclear test on Jan. 6 and subsequent long-range missile launch on Feb. 7 that resulted in the shutdown of the Kaesong Industrial Complex, the last remaining vestige of inter-Korean cooperation.

The government announced the closure of the joint venture park on Feb. 10, after concluding that the money being generated in the project was being diverted by North Korea to finance its nuclear and missile programs.

“The shutdown of the Kaesong Industrial Complex is just the start of general measures we will take along with the international community from now on,” the president said.

“From now on, the government will take stronger and more effective measures to create an environment in which North Korea must change and realize to its bones the fact that it cannot survive through the development of a nuclear program “which will rather only speed along the collapse of the regime,” she said.

Park’s speech was her fourth address at a plenary session of the National Assembly since her inauguration in 2013 and the first on security.

The president went on to say that the “merciless purge” of Jang Song-thaek, the once-powerful uncle of North Korean leader Kim Jong-un, and other high-ranking officials, demonstrated how the current regime is “maintained through an extreme reign of terror.”

She mentioned how at the beginning of her administration, she had set forth a policy that sought to forge mutual trust between North and South Korea, while not allowing for Pyongyang’s nuclear program, and respond more proactively to its provocations.

This idea was further elaborated in her Dresden Declaration in March 2014, during which Park declared unification to be a “jackpot” and outlined a three-point proposal to prepare for Korean unification via humanitarianism, co-prosperity and integration between the people of the two Koreas.

She pointed to inter-Korean talks between senior officials last August, which helped to ease heightened military tensions and led to reunions in October for families separated during the 1950-53 Korean War, along with other civilian exchanges.

“However, North Korea has responded to our government’s efforts and support with nuclear tests and missiles, and it is astounding the world with its claims of a hydrogen bomb test,” she said, indicating that her administration will take a hard-line stance.

Since the mid-1990s, the South Korean government has spent more than 2.2 billion won ($1.8 million) total on North Korea. Including support for civilian organizations, South Korea has provided the North with over 3 billion won, she pointed out.

The president was greeted by a standing ovation by ruling and opposition party lawmakers, as well as her former presidential rival Moon Jae-in, the previous chairman of the main opposition Minjoo Party of Korea, as she entered the assembly a little after 10 a.m.

It is rare for opposition lawmakers to also give a standing ovation. During past parliamentary addresses, the opposition party’s response had always been cool if not openly hostile.

For the president’s speech at the National Assembly on Oct. 29, 2014, in which she discussed administrative policies, only one minority lawmaker, Rep. Cho Kyung-tae, stood and clapped for Park. He has since joined the Saenuri Party.

Opposition lawmakers did not clap even once during Park’s third parliamentary speech last year on Oct. 27.

Park garnered some 16 rounds of applause during her speech.

She warned that South Korea would not long “submit to the North’s provocations with spoon-fed support, unlike in the past.” Her words took a jab at the Sunshine Policy, the foreign policy approach to North Korea that previous liberal governments supported.

The most frequently used words in her speech were fittingly “North Korea,” which was repeated 54 times, followed by “our,” spoken 50 times. This was trailed by “provocation,” said 19 times, “nuclear” at 15, “missile” at 12, and “sanctions” just nine times.

Regarding the controversy surrounding deployment of the U.S.-led Terminal High Altitude Area Defense (Thaad) antiballistic missile system, the president said, “In order to maintain strong deterrence against the North, we are increasing the South Korea-U.S. combined defense capacity and conducting consultations to improve the missile defense posture of the Korea-U.S. alliance.

The announcement on Feb. 10 that we will launch talks concerning the U.S. Forces Korea’s deployment of the Thaad battery is such an example.”

She further vowed to “change the North Korean regime and build true peace on the Korean Peninsula,” adding that the trilateral cooperation among Seoul, Tokyo and Washington would continue to be bolstered alongside solidarity with China and Russia.

Park added that the “strongest-ever” sanctions were in progress at the United Nations Security Council.

But in the last part of her speech, Park changed subjects, calling for domestic cooperation and requesting the Assembly pass pending legislation, including a set of four bills on labor reform, as soon as possible. Ahead of her speech at the National Assembly, Park met briefly with Saenuri Chairman Kim Moo-sung, interim Minjoo Party Chairman Kim Chong-in, Assembly Speaker Chung Ui-hwa and the ruling and opposition speakers.

She also spoke separately with Kim Chong-in for several minutes, their first encounter since March 2014.

Kim was the architect of the president’s campaign promise to uphold an “economic democracy.” However, the two parted ways after Park won the election, with Kim saying that the president failed to follow through on her promises.

At the meeting, Kim asked for a “detailed explanation that could be understood by the people regarding the decision to abruptly shut down the Kaesong Industrial Complex and its necessity.”

Opposition lawmakers said they found the speech to fall short as an explanation to their questions on the closure of the venture park.

In a statement, Minjoo Party spokesman Kim Sung-soo said that Park’s explanation on the shutdown was “disappointing.”

He added that the explanation was “very confusing,” due to backpedaling by the unification minister on his claim that wages from North Korean workers were being used to bankroll Pyongyang’s development of weapons of mass destruction.

On Sunday, Minister of Unification Hong Yong-pyo stated that 70 percent of the cash flowing into the Kaesong complex was being diverted by North Korea’s ruling Workers’ Party to help finance the country’s nuclear and missile development programs.

Yet amid backlash over his statement, Hong said in a parliamentary unification committee meeting on Monday that there was not “clear evidence” to suggest that the workers’ wages, diverted by the North Korean government, were indeed bankrolling the regime’s weapons programs.

The Minjoo Party demanded that Hong step down over the controversy.

“Minister Hong’s remarks over the Kaesong issue can only be seen as having the intention to induce conflict and use it for the general elections,” said Lee Mok-hee, the main opposition’s chief policy maker. “Hong has to volunteer to step down as minister.”

Ahn Cheol-soo, co-chairman of the minor opposition People’s Party, who participated in the standing ovation after the president’s speech, said afterward that it was regrettable that Park did not focus a bit more on North Korea issues, including why Kaesong was shut down, and “how our government will go about it in the future.”