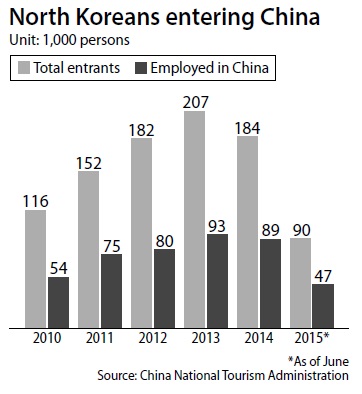 North Korea appears to have no lingering affection for the Kaesong Industrial Complex, according to observers, particularly with China having become a more lucrative employer of its laborers.

After the Park Geun-hye administration announced its decision on Feb. 10 to pull the plug on the last surviving inter-Korean economic project, the North immediately withdrew its workers and expelled South Korea’s operators.

Experts on North Korea say that without China’s cooperation in cutting off hard cash supplies, the shutdown of the Kaesong project will not be effective.

North Korean laborers earned about $240 per month at the Kaesong Industrial Complex, according to the government. The monthly base wage was $165, with additional stipends for clothing, transportation and snacks provided.

However, in China, North Korean laborers receive higher wages. A female North Korean worker employed at a factory in Dandong, China, for instance, receives on average about 3,000 yuan ($460) per month.

North Korean laborers in Hunchun, China, also receive between 2,000 and 3,000 yuan monthly. About 600 North Koreans are currently employed in Hunchun.

For that reason, Pyongyang has argued that South Korean companies actually benefited more than North Korea’s from the Kaesong venture.

In declaring that the military will take over control of the factory site in Kaesong, the North’s Committee for the Peaceful Reunification of Korea said Thursday that the Park Geun-hye government’s decision to end the project was “just short of dropping an axe on one’s own foot.”

“Hit hard by this decision are the entrepreneurs and people of South Korea,” it added.

According to the South Korean government, the base salary for a worker at the Kaesong Industrial Complex was higher than the industrial workers in Cambodia and Bangladesh. And the North Koreans working for Chinese companies in the Rason Special Economic Zone receive about $100 a month, it added.

“Taking into account the numbers excluded in official statistics, about 100,000 North Korean workers are in China,” said Cho Bong-hyun, an analyst at the IBK institute. “The North earns about $1 billion annually through them.

“The North has little regret about the Kaesong Industrial Complex because it has China. China also needs the North’s cheap but hardworking manpower. Because China’s three northeastern provinces show relatively slow economic growth, Chinese laborers are moving to other regions, and the need for North Korean workers has grown more seriously there.”

Prof. Liu Xing of the China University of Political Science and Law added that China will likely turn a blind eye to the North’s repeated provocations because its primary goal in its North Korea policy is not resolving the nuclear crisis, but in maintaining the North Korean regime.