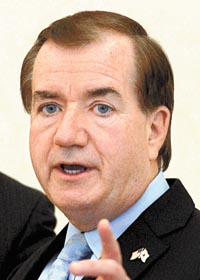 The U.S. Congress on Friday passed to President Barack Obama a bill that has received overwhelming bipartisan support from both houses and slaps North Korea with a new set of broad sanctions following its fourth nuclear test and long-range missile launch.

“The United States and the international community will bring tremendous pressure on North Korea to stop their ability to have access to hard currency, which they use for the purpose of expanding their nuclear weapons program,” California Rep. Ed Royce, the chairman of the U.S. House Committee on Foreign Affairs, told the JoongAng Ilbo on Saturday. “This is the right time to do so.”

“The view of the United States Congress is that this continued provocation by North Korea is completely out of bounds, and that by firing this new intercontinental ballistic missile, it has shown that Kim Jong-un is accelerating his plan to develop these weapons,” Royce added via telephone.

The House of Representatives passed the North Korea Sanctions Enforcement Act with bipartisan support by a vote of 408 to 2 on Friday.

Two days earlier, on Feb. 10, the Senate also passed the sanctions bill unanimously by a vote of 96 to 0.

The legislation targets those involved in the export of luxury goods, money laundering, human rights abuses or undermining cybersecurity.

It also calls upon secondary sanctions on third parties, against any people or entities that do business with North Korea or help facilitate prohibited activities. This could affect China’s approach to Pyongyang as well.

The original sanctions bill was passed in the House of Representatives in January, but the Senate included some new provisions before sending it back to the lower house to vote.

It was sent to the White House and is now pending a signature from President Obama before it can be enacted.

The following is an edited excerpt of the interview with Rep. Royce:

Q. The bill was passed with strong support in the Senate and just two days later in the House as well, which is very rare.

A. The reason we moved so rapidly on this legislation was because the leadership of both political parties in Washington realized the importance of moving quickly to stop the hard currency that North Korea is able to collect, because that hard currency is now allowing them not only to do these tests, but they are successfully miniaturizing nuclear warheads so that they can place them on long-range ICBMs (intercontinental ballistic missiles).

What was the process for passing the legislation in Congress?

We spoke to the leadership on the floor of the House of Representatives from both political parties, and after many hours of debate in the Senate, when the final vote was 96 to 0, the decision was made to bring the bill up as quickly as possible and to vote on it on Friday. The debate had occurred on Wednesday in the Senate. So this is a very quick timeline for action. And I went down to [House] Speaker Paul Ryan’s office immediately after the vote. He asked me to come down and we did; he signed the bill so that he could send it right to the president. So there was an urgency to act.

There have been calls from the international community for China to do something.

I’ve had discussions with Chinese officials about the importance of stopping not just North Korea’s moves toward developing these weapons, but also the proliferation that North Korea has been involved in the past. And this [legislation] will demonstrate to the Bank of China and other financial institutions that we’re very serious about not financing, indirectly, any of this weapons development.

So the Obama administration should do something to press China to take action?

Right. In the bill, of course, the types of sanctions we’ve deployed mean that there will be sanctions on any of the banks that are involved - whether those banks are in China, or in Singapore, or anywhere else that is involved indirectly in assisting North Korea in obtaining hard currency that goes into supporting the regime and its weapons program.

We will also be talking with the government in China about the necessity of preventing this arms race and this proliferation, and the development of this capability by the Kim Jong-un regime.

What do you think of South Korea’s decision to shut down the Kaesong Industrial Complex?

The reason the government in Seoul made that decision was because much of the hard currency that was generated to the North Korean regime was being used directly for the WMD [weapons of mass destruction] program. … And other countries in the region are also acting now with new sanctions against North Korea.