Foreign populations spread out across capital

Foreign populations spread out across capital 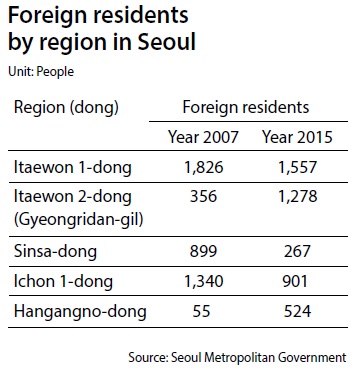 Akiko Yamada, whose husband works in the Korean office of a multinational company, made a choice unlike her predecessors in Korea when she found a house for her family in Hangangno-dong, Yongsan District, in central Seoul.

“The company where my husband works recommended finding a house in Ichon 1-dong in Yongsan District because many Japanese nationals live there,” she said. “But I chose Hangangno-dong because the apartments are newer and cleaner.”

“This area is much quieter than Itaewon 1-dong, and it’s populated with trendy cafes and bars,” the 30-year-old businessman said.

Nowadays, their decisions are not uncommon. And according to numbers by the Seoul Metropolitan Government, the foreign population in Seoul is on the move.

Official data shows that the number of foreigners residing in Seoul has increased over the years, up from 229,072 in 2007 to 274,957 in 2015. But unlike before, when areas populated by foreigners were rather limited, they now include Gyeongridan-gil and Hangangno-dong in central Seoul, and Daerim-dong in southwestern Seoul.

Ichon 1-dong used to be known as “Little Tokyo” for its booming Japanese population. It was natural to see Japanese mothers waiting with their children for the school bus or grocery shopping in the afternoons.

“Ichon-dong is well-known for the sheer number of apartments, but younger Japanese couples seem to prefer Hangangno-dong, which provides newer housing not very far from Ichon-dong,” said an official from the Yongsan District Office.

With the presence of the Yongsan Garrison, Itaewon 1-dong was long known as a hub for foreign residents. But the number of foreigners in Itaewon 1-dong has dropped slightly since 2007, from 1,826 to 1,557 last year.

Song Do-young, a professor of cultural anthropology at Hanyang University in eastern Seoul, cited the changing household sizes of foreign populations as one reason behind the shift.

“For the past 10 years, more foreigners have come to Korea to teach English and work in after-school English programs,” Song said. “Unlike American military officers or foreign diplomats, the language instructors tend to be unmarried.

“Gyeongridan-gil and its cheaper one-room houses are a natural attraction for foreigners living alone,” he added.

Meanwhile, many in the Chinese population in the capital have moved from Garibong-dong in Guro District, western Seoul, to Daerim-dong in Yeongdeungpo District, southwestern Seoul.

However, Seorae Village, well-known for its restaurants and cafes catering to its French population, is the exception. Over time, the French nationals who lived in Banpobon-dong and Seocho 3-dong moved into Banpo 4-dong, where the village is located.

“The French tendency to preserve their culture may play a part, as they may want to keep to themselves rather than mix with other cultures,” said Seo Yong-gu, a business management professor at Sookmyung Women’s University.