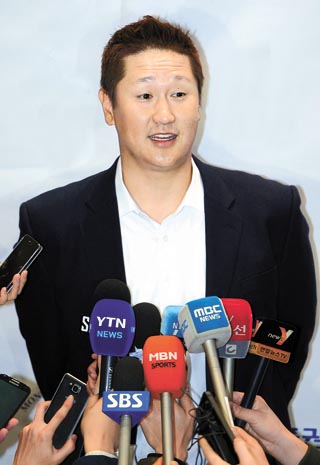 Korean slugger Lee Dae-ho took his first step towards Major League Baseball as he left Incheon airport for the United States on Tuesday.

Lee will join the Mariners spring camp in Arizona with the hope of qualifying for the team’s 25-player roster in the upcoming season. A spokesman from Montis Sports Management Group, Lee’s representative, said, “Lee wanted to leave quietly so we decided not to make an official announcement.”

Lee inked a split-contract with the Seattle Mariners for one year. A split-contract is a form of contract in the MLB in which the terms of a player’s contract differs depending on whether he plays in the major league or the minor league. Lee could earn up to $4 million including incentives if he makes it into the Mariners’ big league roster.

Lee is still without a P-1A visa which is required for a foreign player to play in the American league. He was not expected to obtain the visa until early March. However, the team insisted that Lee join the spring camp immediately.

Although Lee cannot play in a pre-season or regular season game without his visa, he is still able to join the team for early training. “The Mariners urged Lee to join training as soon as possible,” said a spokesman from Montis Sports Management Group. “Lee is most likely to receive the visa directly while in the United States during the spring camp, although we are not sure what the team has in mind at the moment.”

Lee will take part in training as soon as he arrives at Peoria camp, where he will be assigned a uniform and locker.

The spring camp does not begin officially until Feb. 24th when the full Mariners squad is required to report at Peoria Stadium, Arizona. However, Lee will begin his training in advance on Feb. 20th when the Mariners pitchers and catchers start their session.

All Mariners coaching staff and senior management including manager Scott Servais will attend the first session on the 20th. Lee is expected to receive some attention from the coaching staff since his attendance was specifically requested from them.

The competition for a regular position is fierce. Adam Lind is most likely to start at the position. The left-handed batter who last season recorded a 0.277 batting-average, 20 homeruns and 87 runs-batted-in is determined to show his presence in defense as well in the upcoming season. And Lind is not the only obstacle that Lee has to overcome. Jesus Alejandro Montero Lopez and Gabriel “Gaby” Sanchez who just transferred from Tohoku Rakuten Golden Eagles will also compete for the infield position.

However, Lee is determined to fight for the spot. He is in good physical shape at the moment as he lost about 11kg during the Lotte Giants Spring camp in January this year and plans to lose more weight and gain more muscle. He knows he is considered ‘overweight’ in the MLB. Pursuing his MLB dream without the spotlight and drama of Korean media attention, there is much anticipation for Lee to progress in the upcoming season.