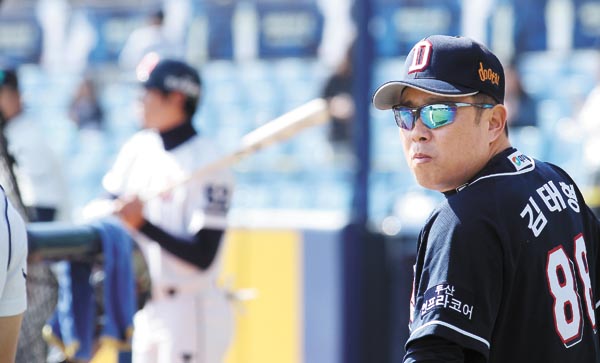 Doosan Bears manager Kim Tae-hyeong watches his players warm up during 2015 KBO postseason match against NC Dinos. As the Bears skipper, Kim encourages his players to play their best game by allowing them to stay focused and relaxed. Thanks to his encouragement, the Bears won the 2015 KBO Championship. [ILGAN SPORTS]

Young pitchers from Doosan Bears share a peculiar habit on the mound: they chew gum - on the orders of their manager Kim Tae-hyeong.

Kim signed with the Bears in 2015 and one of his first assignments as skipper was to bolster the Bears’ weak bullpen pitching. With veteran relief pitchers such as Lee Yong-chan no longer on the team due to military service and trade, it was up to the young pitchers to fill his shoes. As might be expected, things went haywire in the beginning.

One of the core issues was nerves. Whenever young pitchers were on the mound, their face became rigid and they lost their confidence. After pondering a number of possible solutions, Kim came up with the idea of having his young players, such as Jin Ya-kop and Yun Myeong-jun, simply chew gum when they are on the field. He hoped this would allow players to relax and not be intimidated by batters.

Chewing gum while on the mound could be perceived as offensive or unsportsmanlike. One sports commentator even told Kim to stop his players from chewing gum during a match.

Although Kim was aware of the negative perceptions, he was adamant. When asked about his policy, Kim said, “I think chewing gum helps my players to relieve tension. I understand that the opposing team might look at it as unsportsmanlike. However, it leaves a strong impression and could even intimidate the opponent. I thought my players might be relieved from some of the psychological pressure.”

Kim’s tactic comes from his own experience as a catcher. “For an inexperienced catcher, even sending a pitcher a sign could be tough,” said Kim. “I was tense but then my coaching staff told me to do ‘whatever I want to do’ and that single remark made a tremendous difference.” Essentially, the ulterior motive behind the gum-chewing policy is to allow the pitchers to throw ‘how-ever they want to throw.’

Thanks to Kim’s strategy, left-handed pitcher Jin Ya-kop, who often became agitated in a pinch, was able to overcome his shortcoming. “I often lost my composure when my pitching balance was off or when I allowed a batter on base,” said Kim. “So I started to chew gum, hoping to look steady and composed. It also helped me to concentrate better in the game.”

Jin added that he also realized the importance of leaving a strong impression on his opponents and how that affects a game and overall performance.

The Bears’ relief pitching became stronger towards the end of the last season. The momentum continued even into the postseason where the Bears blew out the Samsung Lions to claim the Korean Baseball Organization (KBO) Championship.

“I started to think to myself that it is okay for my pitchers to allow a hit and this put me at ease,” commented Kim. The manager himself started to show more self-confidence that he emphasized for his players.

In a crucial moment of a game, even the manager cannot escape from nervousness. Does Kim chew gum? “I have chewed gum before,” laughed Kim. “But it looked very unprofessional on TV so I decided to eat some candy instead.”