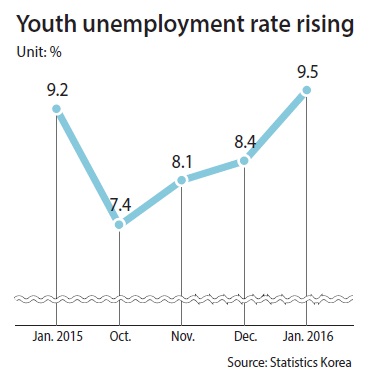 Gloomy reports about the job market are the latest among numerous disappointing economic indicators, including falling exports and low inflation, to show how Korea’s economy has stumbled since the beginning of the year.

The job situation has gotten particularly worse for young people, which has only added to concerns about a decelerating economy despite top policy makers’ denial of a recession.

According to Statistics Korea, the unemployment rate for people between the ages of 15 and 29 in January was 9.5 percent. This is the highest in seven months, since the 10.2 percent recorded in June last year. The rate is 0.3 percentage points higher than the same month last year, while being 1.1 percentage point higher than in December 2015. Accounting for only January’s figure, it is the highest unemployment rate for the age group since January 2000, when it hit 11 percent. By the numbers, the amount of unemployed in the age group grew 4.6 percent year-on-year to 413,000.

For those between the ages of 25 and 29, the ages of most college graduates in search of their first job, the unemployment rate was 8.3 percent, 0.9 percentage point higher than a year ago and a 16 percent rise year-on-year.

This is a stark contrast to those in other age group, including those in their 30s and 40s, whose unemployment rate dropped year-on-year.

“We believe the unemployment rate has gone up largely because the period in which young people are searching for jobs has extended largely as more people are seeking stable jobs,” said one Statistics Korea official.

In fact, the number of people who are preparing for employment by attending private academies or studying for certification exams has increased 8 percent year-on-year or 45,000 to total 609,000.

Overall, employment numbers in January increased 339,000 to 25.4 million, which is a 1.4 percent increase compared to the same period last year.

But when seasonally adjusted, the overall number of employed actually declined 0.3 percent year-on-year, which is a turnaround from the 0.7 percent in December.