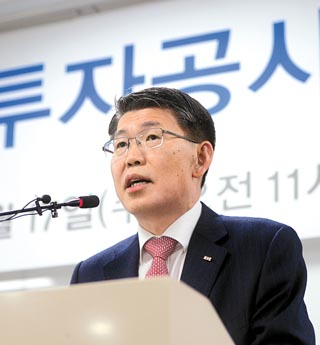 Korea Investment Corporation (KIC), a state-run overseas investment institution, will go through a harsh reform process in order to reposition itself as a trusted public institution and help increase state wealth, its new chief executive officer said on Wednesday.

“Any violations of the internal rules and regulations will enable dismissal of not only executives but also the CEO,” Eun said at his first press conference. “Duties of the CEO and executives will be documented formally.”

His predecessor Ahn Hong-chul had come under fire for making inappropriate remarks on social media, the interruption of previously made investment decisions and taking luxurious business trips.

He also decided to introduce a whistle-blower channel to will allow subordinates to anonymously report unfair orders or acts by superiors.

To encourage employees to work better, Eun said he will adopt a performance-based incentive system, which is an expanding trend at public institutions because of encouragement by the government.

“We will hire talented investors and hope to see one or two star players who can get even higher wages than the CEO,” he said.

The institution will also increase its proportion of investments in alternative assets like properties, infrastructure and funds from the current 12.4 percent to 20 percent by 2020. The goal is lower than the 25 percent proposed by his predecessor, as Eun said he will take a cautious stance on investing state funds in risky assets.

In 2010, the institution made aggressive investments in the energy industry based on its forecast of high oil prices, but the unexpected plunges in current crude prices have brought losses to seven of the projects in which the institution invested.

As of last year, the KIC runs a total of $80 billion entrusted by the Ministry of Strategy and Finance and the Bank of Korea. The total returns form investments stood at $11.8 billion.