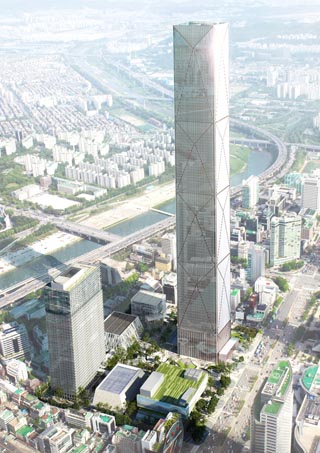 The nation’s second-largest conglomerate announced on Wednesday that a total of six buildings - a 105-story headquarters building, two exhibition halls, a convention center, a concert hall and a hotel - will be built separately on 15,000 square meters (3.7 acres) of land near COEX in Gangnam District by 2021.

“We expect this new headquarters area to be Seoul’s new landmark,” said Kim Yong-hwan, vice president of Hyundai Motor Group. “We are glad to inform you that negotiations between the company and the city government have been eventually wrapped up without any major problems as we agreed to the city’s new MICE [meetings, incentive tours, conventions and exhibitions] industry fostering plan. The GBC [global business center] will be a new global business hub and will be a new engine for us as well.”

Since the land was owned by the Seoul Metropolitan Government, the group leading the nation’s two auto giants - Hyundai Motor and Kia Motors - will donate 1.7491 trillion won ($1.4677 billion) to the municipal government as a “public contribution fund,” referring to a company paying the local community compensation for taking public property. Excluding the donation, Hyundai already invested 10.5 trillion won for the land in bidding with Samsung Group, which was triple the assessed value of the 19.6-acre site.

The municipal government said it will use the money to improve the city’s overall infrastructure and also revamp the city’s sewage system. It will discuss use of the funds with other local district governments and civic groups.

“We tried to extend the benefits to citizens as much as we could while we were negotiating with Hyundai Motor Group,” said Jin Hee-sun, a spokesman for the municipal government. “A walkway that will connect COEX, the Tancheon [trail], the Sports Complex [in Jamsil, southern Seoul] and the Han River will start from an area around the GBC.”

The top two floors of the 105-story GBC building will have an observatory for tourists to enjoy cultural events and exhibitions at cloud height.

The concert hall will have a theater with 1,800 seats and a classical concert hall with 600 seats. “The overall size of the concert hall has been enlarged 1.5 times from the initial plan, as we wanted to provide a high-quality cultural space for citizens,” said Hyundai’s Kim. “We guarantee that the place that will be equipped with high-end musical instruments and will be the nation’s best facility for the performing arts.”

A six-star hotel and businesses for MICE will be housed in the 40-story office building. The hotel will have a total of 265 rooms and restaurants. Some divisions of Hyundai Motor Group will also be in the building.

The GBC is expected to create some trillions of won of economic spinoff. Hyundai Motor Group said running the GBC for 20 years will have an effect of hiring 57,000 people per year and will have a 253.1 trillion won effect on production inducement.