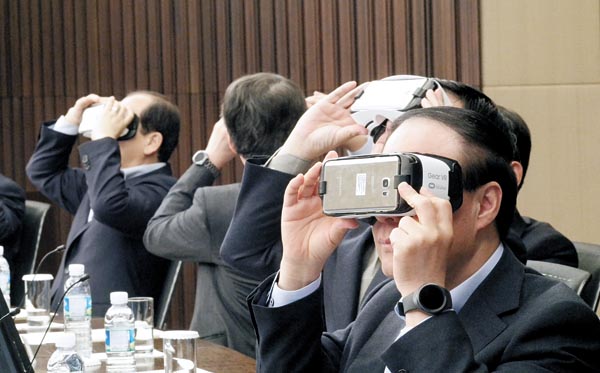 Executives of Samsung Group’s affiliates try out the Gear VR during a weekly meeting on Wednesday at Samsung Electronics’ office in Seocho-dong, southern Seoul. [SAMSUNG ELECTRONICS]

Samsung executives tried out virtual reality (VR) devices and discussed how to embrace the new technology at a weekly meeting on Wednesday, the group’s latest move to emphasize the potential it sees in the sector.

The week’s lecture was unusual, as outside scientists and prominent pundits are typically featured.

“The lecture was about VR industry trends, and we discussed how we can tap into the current trend, as well as how Samsung Electronics can prepare for it,” Koo said.

Koo added that applications of VR technology are broad and can include devices other than smartphones.

“The main reason why Samsung Electronics started the business was to increase competitiveness and boost the appeal of its smartphones,” he continued, “But we have learned that the use and application can be more diverse than we thought.”

Following Samsung Electronics’ release of its Gear VR, the tech powerhouse is seeking to reach a wider consumer base by providing diverse content through partnerships with entertainment companies.

Back in November, Samsung released an affordable version of the Gear VR for 129,800 won ($106) in the domestic market. The new product, jointly developed by Oculus, can be installed on all of Samsung’s latest smartphones and phablets, including the Galaxy S6, S6 Edge, S6 Edge Plus and even the Note 5.

The new Gear VR offers a 360-degree panoramic view and has widened its viewing angle to 96 degrees. For the convenience of users, it is 19 percent lighter compared to its earlier model, at 318 grams (11 ounces).

Koo said that Samsung is on the lookout for diverse partnerships for the VR business and is closely monitoring the global tech giant’s moves.

“Different players in and outside the country are trying to enter the VR business through investment and mergers and acquisitions,” Koo said, referring to Google’s Cardboard technology and 21st Century Fox’s release of a VR version of the hit film “The Martian.”