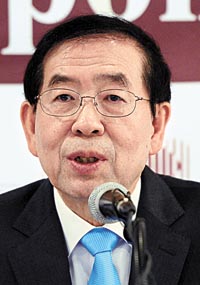 Seoul Mayor Park Won-soon was cleared by a Seoul court Wednesday after being hassled for years with allegations that his son dodged mandatory military service, claims he said were politically motivated to undermine his 2014 re-election bid.

The Seoul Central District Court found the seven defendants in the case guilty of spreading false allegations that the mayor’s son had evaded military service by fabricating his medical records.

Park filed a defamation suit against those individuals, including doctors, in November 2014 for spreading false allegations with the aim of meddling in the June 4 local elections.

More than a year later, the defendants, including Yang Seung-oh, 57, a doctor at the Dongnam Institute of Radiological and Medical Sciences, were found guilty by the Seoul court for spreading allegations “without any rational or objective evidence.”

They were fined between 7 million won ($5,700) and 15 million won each, after the court determined that they “were aware they were spreading false information.”

The court added that it took into consideration the fact that the allegations did not have any significant effect on the elections.

Park dealt with accusations alleging that his son dodged conscription over four years while he served as Seoul mayor. This is the first time a court has ruled the rumors to be groundless.

In August 2011, the mayor’s son, Park Ju-shin, then 26, entered the Korean Air Force Education and Training Command in Jinju, South Gyeongsang. But within four days, he was released after experiencing intense pain in his inner right thigh.

The following December, the younger Park submitted to the Military Manpower Administration (MMA) the results of an MRI, X-rays and other medical records from the Jaseng Hospital of Korean Medicine in Seoul, which showed that he had a herniated lumbar disc, which exempted him from military duty.

Lawyer Kang Yong-seok, then an independent lawmaker, first raised the accusations in January 2012 that the mayor’s son dodged compulsory military service, claiming that Park Ju-sin’s medical records submitted to the MMA were not his own. He demanded that Park Ju-sin undergo an open physical examination.

That February, Park Ju-sin underwent an MRI scan on his back at Yonsei University’s Severance Hospital in order to clear himself of any suspicion. Doctors confirmed that the pictures were identical to the ones submitted earlier and that he did, in fact, have a herniated disc that exempted him from enrollment. Kang consequently resigned.

But the allegations of conscription dodging did not stop there. Local media outlets, Internet forums and tweets raised questions over the MRI, saying it did not fit that of someone in their 20s.

The mayor filed a defamation suit in November 2014, and the seven defendants were later indicted in violation of the Public Official Election Act for spreading allegations that the open medical examination had been carried out on someone other than Park Ju-sin.

Yang reportedly found fault with the medical records submitted to the MMA and the open examination conducted at Severance Hospital, while denying that he did not have any intention to meddle in the 2014 elections.