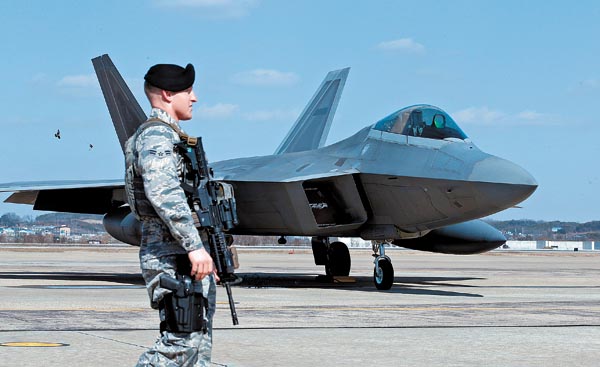 In a move intended to intimidate North Korea, the United States sent on Wednesday its most advanced stealth fighter jets to the Osan Air Base in preparation for the largest-ever joint military exercises next month with South Korea.

Four F-22 Raptors arrived around noon at the U.S. Forces Korea’s air base in Pyeongtaek, southern Gyeonggi. The four jets were dispatched from Kadena Air Base in Japan. Four South Korean F-15Ks and four U.S. F-16s escorted the four F-22s.

“While two of the four F-22s will return to the base, the other two will stay in Osan for some time,” an official from the U.S. Forces Korea said, without elaborating on the length of their sojourn.

The advanced tactical fighter jets, capable of flying into enemy territory undetected, arrived just one day after President Park Geun-hye publicly warned that the Kim Jong-un regime would speed along its own “collapse” if it did not abandon its nuclear and missile programs.

The warplanes stationed in Japan are capable of performing missions on the Korean Peninsula within two hours, and the North has remained uneasy about the possible deployment of the F-22s.

When former North Korean leader Kim Jong-il was alive, he suspended public activities when the F-22s were deployed in South Korea.

“The F-22 Raptor is the most capable air superiority fighter in the world, and it represents one of many capabilities available for the defense of this great nation,” Lt. Gen. Terrence J. O’Shaughnessy, the deputy commander of the U.S. Forces Korea, said in a statement.

“They are by far the most advanced and capable fighter jets in the world,” added an official from South Korea’s Ministry of National Defense. “They were brought here to warn North Korea about repeat provocations and to demonstrate our force.”

Following North Korea’s fourth nuclear test in January and a long-range missile launch earlier this month, South Korea and the United States have increasingly demonstrated their allied capabilities. The United States sent a nuclear-capable B-52 bomber to South Korea on Jan. 10, just four days after the North said it had successfully tested a hydrogen bomb. More advanced capabilities and strategic assets will be sent to the peninsula for next month’s joint military exercises, in addition to the series of drills and deployments over the past few weeks.

South Korea and the United States are scheduled to hold the largest-ever joint military drills in March. The annual Key Resolve exercises will begin on March 7; U.S. capabilities include an aircraft carrier and a nuclear-powered submarine. While Seoul and Washington have annually stressed that the routine drills are defensive in nature, Pyongyang has fiercely protested them, calling the war games a rehearsal for an invasion.

“After the North conducted the nuclear test and launched the missile, the U.S. plan was extensively changed to send more capabilities to the upcoming drill,” a South Korean military official told the JoongAng Ilbo on Tuesday, asking for anonymity. “The change was suggestive, as it shows a strong resolve by the United States to deter additional provocations by the North.”

The capabilities that will be deployed to South Korea include a maritime pre-positioning ship squadron (MPSS), which stands at the ready to be sent anywhere in the world on a moment’s notice. The MPSS carries capabilities and supplies for a Marine Expeditionary Brigade of up to 17,000 personnel for 30 days at war.

The United States operates only three squadrons from around the world, and a South Korean military official well-informed with U.S. military affairs said the decision to send one of the three squadrons amid escalated tensions on the peninsula was significant.

“One or two ships usually participated in a drill with Korean troops in the past to check its readiness,” he told the JoongAng Ilbo. “But it is rare that such a large fleet is coming to Korea.”

“Due to economic hardship, the North couldn’t last long in a wartime situation,” he said. “But South Korea’s troops, the U.S. Forces Korea and the MPSS alone are more than enough to fight until American military reinforcements arrive from the U.S. mainland.”

According to military sources, the MPSS to be sent to Korea next month is the MPSS Three, operating near the waters of Guam and Saipan. The squadron operates five massive ships, including the USNS 1st Lt. Jack Lummus and other logistics vessels and barges.

“The squadron is strong enough to match the entire combat capabilities of some countries,” a source said.

However, it has not yet been determined which vessels from the squadron would be ordered to sail to South Korean waters, the source added, explaining that short notice is always meant to test troops’ preparedness.

The USNS 1st Lt. Jack Lummus is a 44,000-ton logistics naval vessel. It carries about 700 military vehicles, including tanks, landing vehicles and other military cars, as well as ammunition, fuel and water.

It is capable of carrying 15 percent of the total tanks and armored vehicles owned by the South Korean military. The USNS Lummus came to Jinhae, South Gyeongsang, in 2008.

More than 7,000 U.S. Marine forces, including 4,500 from the U.S. mainland, will attend the Key Resolve exercises next month. “The number of American Marine forces in the drill will be more than twice as large as the South Korean Marine troops,” an official from the Joint Chiefs of Staff said. “This exercise will be the largest ever.”

A series of military drills have already been conducted over the past few weeks between the United States and South Korea. A U.S. nuclear-powered submarine participated in a drill with the South Korean Navy in waters off the east coast from Saturday to Monday, the Navy said.