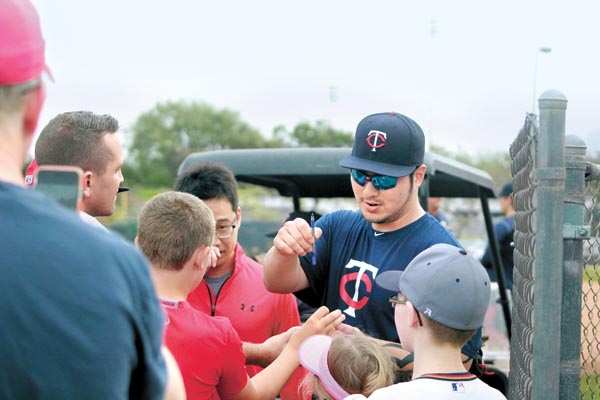 The Minnesota Twins Park Byung-ho signs autographs for fans at the Twins Spring Camp in Fort Myers, Florida. Despite his success in Korea, Park plans to dive into the upcoming season at the MLB with the mindset of a rookie. [JOONGANG PHOTO]

For Minnesota Twins slugger Park Byung-ho, adjusting to the United States has seemed like a breeze.

In fact, when Park was spotted at spring training in Fort Myers, Florida on Tuesday, he looked like a veteran Major Leaguer. He paced around the field, approaching teammates for conversation and greeting others with a wide grin. His outgoing personality was so evident that it even made Park’s interpreter, Kim Jung-deok, a little bitter.

“Park understands almost everything in English,” he said. “I think I’m going to lose my job soon.”

The Twins inked a four year contract with Park in December 2015 worth $12 million, including incentives, with an option for a fifth year. But the team’s total investment in Park, which includes the mandatory posting fee Major League teams pay to their KBO counterparts when they sign a player, exceeded $30 million. The sheer volume of investment demonstrates how much expectation the Twins have for Park. Right-handed Park is likely to start off the season as a designated hitter, and when needed, he’ll platoon with the Twins star hitter Joe Mauer who bats left-handed.

Park trained in the outfield after lifting weights early in the morning, and also managed to get in some batting practice. Later in the day, the JoongAng Ilbo sat down with Park to talk about training with the Big League’s brightest stars, as well as with up-and-comers from the minors.

Q. Tell us about your plan for the season.

A. I am a rookie here in the MLB. I will be patient and tackle whatever obstacle comes my way.

It’s been a while since you came to Fort Myers. How do you feel?

I feel I’ve settled in quite well so far. I don’t really feel distant from the Twins players anymore, whether they are in the major league or the minor league. We often engage in small talk. They ask me about Korea a lot.

A lot of fans are asking for your autograph. What is that like?

I honestly have yet to really understand how I should interact with fans here in the United States. I try to sign autographs for the fans as long as it does not interrupt the team’s practice.

It looks like the language is not much of a problem for you. How did you manage that?

(Laughing) That is not true. English is difficult. Just when I think I understand my teammates or the coaching staff, they start to talk faster. I simply tell them I’ve reached the extent of my English abilities when I realize I no longer can keep up with the conversation. There was a rumor that I used to carry around English vocabulary cards back in Korea. I must say, that is an exaggeration. I did study, but not as much as it sounds.

You seem to get along with your teammates really well. How did you become so close to them in such a short amount of time?

I never hesitated to start conversations with foreign players while I was in Korea. I knew it must be difficult and lonely for them to be overseas. Likewise, I am the only Korean here and my teammates help me out a lot. I try to approach them first as well. I heard that’s one of the best solutions to overcome difficulties of being in a new team and a new country.

How is the training so far?

I just began simple batting training. My pace is no different than when I was in Korea. I try not to be pressured by the idea that I must show something now that I am in the Big League. If I overdo it, I could injure myself.

The Twins invested quite a bit of money trying to bring you in. What are your thoughts on that?

I think the team will have patience until I demonstrate my worth. I also don’t think I will have to worry about the competition for starting position.

What do you think will be most important throughout the season?

I think being free from pressure will be crucial in playing up to my potential. I never set a goal for my number of homeruns while in Korea. In fact, I never placed too much emphasis on numbers such as homeruns and RBIs. This is my first year here at MLB. I will go into the season with the mindset of a rookie.

You placed second in the Korean league last year in batting speed at 141.2 km/h (87.7 mph). How do you think you will do next season now that you are in the Major League?

I haven’t played against big league pitchers yet so I am unsure of what to expect. However, just by watching past games, I can tell how unpredictable their balls are. I need to develop my swing to be powerful yet precise. This does not mean I will adopt whole new swing mechanism. Kang Jung-ho of Pittsburgh Pirates who came to the Big League one year ahead advised me to stay consistent with my swing form and follow my instinct depending on the pitcher and the situation. I plan to follow his advice.

Nexen Heroes manager Yeom Kyung-yup said your strength as well as your weakness is that you think too much. Why did he say that?

I think it’s because I get stressed easily. I guess it is true that I tend to stress. But I think I managed my stress well so far, considering my performance in the past. Of course, there are those players who don’t stress much. That is certainly not me. Not only do I stress when things are not going so well, but I push myself harder when things are going great. I’ve handled my stress well so far though. As long as I stay confident, I should be fine.