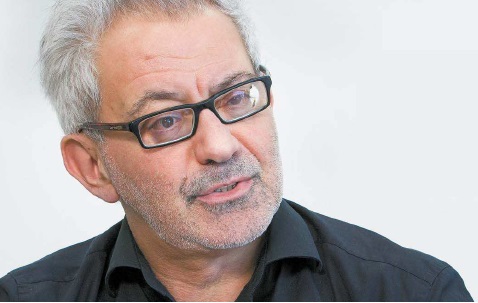 Bartomeu Mari Ribas, the new director of Korea’s National Museum of Modern and Contemporary Art, talks about the big picture of the museum’s future. [PARK SANG-MOON]


Korea’s national museum can be, if not the biggest, at least one of the most original museums in bringing local context in a global perspective, as Western standards no longer rule the entire world, Bartomeu Mari Ribas, new director of Korea’s National Museum of Modern and Contemporary Art, said in a recent interview with the Korea JoongAng Daily.

Two months have passed since the Spanish-born former director of the Barcelona Museum of Contemporary Art was appointed as the Korean national museum’s first foreign director. Amid the local art scene’s expectations and concerns, the Korea JoongAng Daily sat with him on Monday in the museum’s Seoul branch east of Gyeongbok Palace in central Seoul.

In the interview, he expressed the view that the freedom of expression and the accompanying responsibility are both important. He also showed his interest, while being cautious about the recently renewed controversy over the authenticity of a painting, which belongs to the museum’s collection and is attributed to the famous Korean artist Chun Kyung-ja (1924-2015).

Q. You’ve been very active in Europe, but, as long as I know, you’ve not been involved in many East Asian art institutions or events. Why and how did you decide to come to Korea?

A. I don’t claim to be a specialist either in Asian art or Korean art. But this is an important moment for global critics and curators to pay serious attention to contemporary art made in this part of the world. I didn’t say it is the moment to discover Asian art or Korean art, because we’ve known about it for a long time. But it is a moment when we begin to understand the complexity of the languages and traditions of the Asian art, which will help it transcend the locality and become also part of the international language.

Now, the Western canon no longer explains the entire world. Different other canons, criteria and ways to tell the history appear to be very significant. Asia is one of them and certainly within the Asian context Korea is a leading one. That is what motivated me to come here. Besides, I have traveled to Korea 10 to 15 times since 2005 and I’m fascinated by this country’s culture.

What’s your opinion about Korean contemporary art’s status in terms of the international recognition?

My feeling is that, while we have come across individual Korean artists in international museums and known about them, now it’s time to construct a narrative that tells the artists’ relations with time and space and that brings Korean contemporary culture and art to the larger global arena - not in terms of competition but in terms of dialogue.

With these artists, Korea is getting the global attention. Our institution [MMCA]’s role is to help consolidate it, through the engagement with artists’ initiatives and strengths. Contemporary art museums should be able to write and tell the story of what specific to our time the contemporary artists speak about to us and speak globally. In that sense, our institution’s potential is enormous because Korean art is very much linked to and engaged with history and tensions of the present of this country - engaged in reality.

Regarding that, Korea has very complicated political issues, just as Spain does, and the related artworks bring about controversies from time to time. Do you know the censorship scandals in the Gwangju Biennale 2014 and the Seoul Museum of Art 2015 exhibition? If you faced similar problems, how would you solve it?

Yes, I know about them. I completely believe in freedom of expression and in the need for artists to use this freedom. As institutions, we have to make sure this freedom of expression is used with responsibility. In the context which is very polarized like the Korean one, I, as a foreigner, will be very respectful and cautious. But I always believe that art is something that makes people free. And we should never forget that freedom is something we experience in relations with others. So as in life, freedom is to be enjoyed within the context of responsibility to others. So, I am against all forms of censorship but I am very aware of the character of public institutions which obey the public good. Museums are part of the public culture.

Then, what do you think about the controversy over Facebook’s censorship on a French user who posted a photo of the famous 19th-century artist Gustave Courbet’s painting “The Origin of the World,” which depicts female genitalia? If the painting comes to Korea - to the MMCA, will you put an age limit on the audience?

As for the Facebook case, this obeys to the policy of the private company. Let’s not forget Facebook isn’t a public space but is a space owned by a corporation. And whether I agree or not with the company’s action, it is not relevant, because they are free to use the space they own in the way they consider.

The public museum like the MMCA is different. I will first consult with my colleagues in the museum - the curators who know about the rules and morals of the Korean society. I grew up in the system of values that does not consider the exposure of genitalia to be offensive. I know that many of European citizens would disagree with what I say but this is the nice thing about the democratic system. You can disagree but you can still live together. But I will try to understand what the local values and public sentiment about the exposure of certain images. If you are in the UAE or Iran, you will be very cautious in showing certain images - not only nudity. I would first openly discuss the consequences with my curatorial team.

What’s your impression about the Korean public’s awareness of contemporary art compared to that of European people?

The awareness of the Korean society and curiosity for contemporary art is high. Most of European museums benefit from high exposure to tourism. And I think in Korea, the major source of visitors is from the local people Tourism is not as high as in big capitals like London, Paris or Madrid. What that means is that there is high curiosity and high demand.

Have you checked the MMCA Korea’s collection? Critics say the MMCA’s collection is weak in its amount and quality, compared to European state-run museums. What do you think?

I am in the process of still learning the collection. It’s large collection and learning about the collection is not something you do immediately. It demands time and involvement. While collection of the MMCA is very strong in Korean art, it is not so strong in international art. That means we have great opportunity to develop new type of collection. Museums like the MMCA do not need to collect everything.

Certainly it doesn’t make any sense to pretend to compete with the big museums which have been building up their collections for the past 100 years. The French government has been buying contemporary art since 1790 the year after the French Revolution. The MMCA was created in 1969. Today, given the context of globalization, we have the opportunity of developing unique approach to contemporary art that makes it, if not the biggest, at least one of the most original and most pioneering museums, in bringing one local context in a global perspective. This is what I would like to do here.

Can you give some details about your plans for the museum’s collection and exhibition?

I will give you an example. Nam June Paik is the first global artist in history. By his life and his works, he really represents the real global approach to art. And while you could say that works of Paik are quite well represented in Korean public collections, I would like to investigate the possibilities of acquiring the relevant works by the artists with whom Paik was in contact through his life - like the German Fluxus artist Joseph Beuys. The works would explain why Paik was so important and would help tell one portion of the history of contemporary art through the international figure of Korean art. You can reach several generations of artists, you can reach Asia, Europe and United States and you can also connect to history of video art - reaction to TV, which was perceived to be the first global communication system.

Then you will focus on the internationally active Korean artists and the related foreign artists?

Not only. We will work with artists of different generations independent of whether they are well known and whether they have international career or not. Our criteria will be quality and relationship with the history. [Even the artists without international careers can have significant relations with international art history.] I believe a museum of contemporary art has to contain certain degree of spirit of risk. Although I would like to make a program that tells Korean society why so many excellent artists from Korea are appreciated abroad, as I have known many of those artists, even before knowing the Korean society, we will not focus only on that.

And do you know the ongoing controversy over the authenticity of the painting attributed to Chun Kyung-ja? [In 1991, the artist declared the painting a forgery but the national museum concluded it is genuine after an appraisal by a group of experts outside the museum, which enraged the artist. Chun’s death last year rekindled the controversy.] As the director of the museum, how will you handle the problem?

I’m aware of this issue and I have already begun discussions with my curators. The subject is very complex. The museum and the artist had the opposite positions about the painting and the artist is no longer with us now. As far as I know, there are no precedents of such a problem. So I don’t know what I would do. I would probably call some experts outside the museum to advise us. We need time to analyze and bring together different arguments.