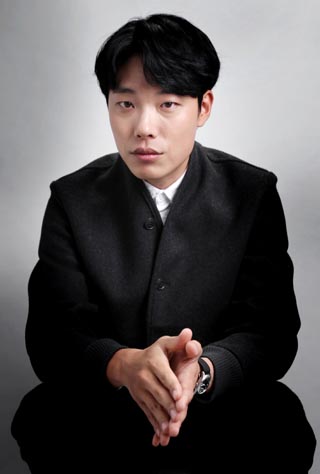 The 30-year-old actor only debuted two years ago through the short film “Midnight Sun” and made his first feature appearance in last year’s independent film “Socialphobia” in a supporting role.

It wasn’t until he landed the role of Jung-hwan, one of the female protagonist’s love interests in “Reply 1988,” tvN’s megahit drama that broke viewership records, that he started to develop a real following.

For his first fan meet-up scheduled for April, all 1,500 tickets reportedly sold out within two minutes.

But the actor says with it came a huge responsibility and the need to be more careful.

“I tend to behave more humbly and carefully these days,” the actor said in a recent interview with Ilgan Sports, an affiliate of the Korea JoongAng Daily.

“I am the same as before, but others see me differently. So I try to watch my words and behavior more carefully than before. I think it’s right to keep doing what I am doing with more care and gratefulness.”

A. I finally feel that it is all finished. I have been involved with the drama for nearly seven months, so it was hard to break out of it.

Your popularity soared in the last two years. How are you dealing with it?

It’s kind of surprising because I didn’t expect it at all. So to tell the truth, meeting fans and doing interviews still feels very awkward. It was unbelievable to see the tickets for my fan meet-up being sold out that fast.

The fact that it was a family drama. I liked that it had that warmhearted feeling that families shared during the ’90s. And I felt more proud when many people sympathized with it. When I was young, I used to play soccer and watch videos with everyone in my neighborhood, which is well-reflected in the drama. It was good to feel like I was back in those times again.

What was the most memorable part of the drama for you?

Sharing banchan [side dishes] with the neighbor. We don’t do that anymore, but back in those days, we really rotated side dishes with neighbors, and I remember my mom telling me to get this or that from next door.

Your on-screen rival was Park Bo-gum, who actually succeeded in marrying the female protagonist Deok-sun, played by Hyeri. How did you get along with Park in real life?

We didn’t talk that much about competing with each other or even guessing who would finally end up with Deok-sun. We got close when filming the drama, but we got even closer after recently participating in a traveling variety show together.

Do you think you will participate in future projects with a different mind-set now that you are receiving more attention?

I think it is important to keep doing what you have been doing in the same way. It was the same for “Reply 1988,” for which I didn’t try too much to do something different just because it was a big project. I am planning to do the same for my next work.

You decided on your next film pretty fast, which is “The King” co-starring Zo In-sung. How did you decide so fast?

The screenplay was really attractive, and I liked my character as well as the director. To tell the truth, I have to say I was chosen by it rather than choosing the film. I really appreciate it.