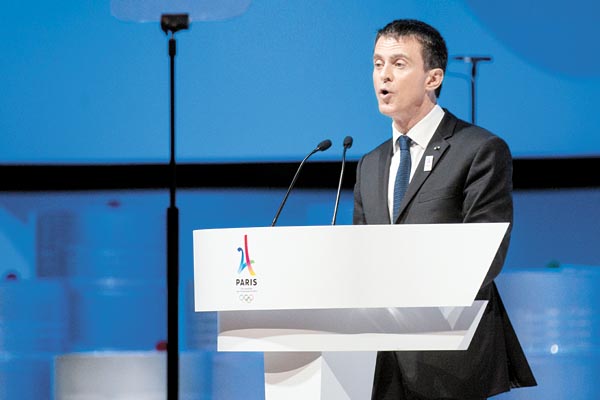 French Prime Minister Manuel Valls delivers a speech during the presentation of the Paris candidacy for the 2024 Olympic and Paralympic Games in Paris, France, on Wednesday. Paris, which hosted the Olympics in 1900 and 1924, is competing against Budapest, Rome and Los Angeles for the games. [AP/NEWSIS]

LAUSANNE, Switzerland (AP) - The International Olympic Committee praised the four cities bidding for the 2024 Olympics on Wednesday for relying heavily on existing and temporary facilities to cut costs and avoid white elephants.

IOC President Thomas Bach said the projects were “fully in line” with his “Olympic Agenda 2020” program, which seeks to reduce the costs of bidding for and hosting the games.

“For all four, there is a clear focus on sustainable development, legacy and in particular how the facilities are going to be used after the Olympic Games,” Bach said in a statement.

Jacqueline Barrett, the IOC associate director dealing with bid cities, said the four candidates “are making use of an extremely high percentage of existing and temporary venues, possibly the most ever.’

“The plans received indicate very thoughtful consideration of what the cities and their people need for the future,” she said.

The IOC will select the host city in September 2017. Wednesday’s submission of the first bid details marked a milestone for the two-year campaign.

Paris and Los Angeles are both bidding to host the games for a third time. Paris hosted in 1900 and 1924, while Los Angeles held the games in 1932 and 1984. Rome staged the 1960 Olympics, while Budapest is seeking to bring the games to Hungary for the first time.

Rome, Paris and Los Angeles all held events Wednesday to promote their bids. Budapest has run a much lower-key campaign.

The IOC is determined to bring down costs in the wake of criticism over the reported overall $51 billion price tag associated with the 2014 Winter Games in Sochi, Russia. Much of the spending went toward long-term development of the Black Sea resort.

The Sochi costs scared off a number of potential European bid cities for the 2022 Winter Games. Several proposed bids were rejected in referendums, and four cities pulled out during the race. Only two cities were left in the running, with Beijing defeating Almaty, Kazakhstan, in last year’s IOC vote.

The 2024 race was also affected when Hamburg was forced to drop out after its bid was rejected by voters in the German port city.

Wednesday’s bid files were submitted to the IOC on USB keys for the first time, rather than heavy books.

Under a new bid process, the cities must deliver files on different themes on three different occasions over the course of the campaign. Wednesday’s submissions covered ``vision, games concept and strategy.”

The next files, covering governance, legal and venue funding, are due by Oct. 7. 2016. The third submission, covering games delivery, experience and venue legacy, is due in February 2017.

Unlike in previous bid contests, there will be no cut-down phase or short-listing of finalists. All four candidates are expected to go the distance, although the executive board can cut a city if it fails to meet basic requirements. AP