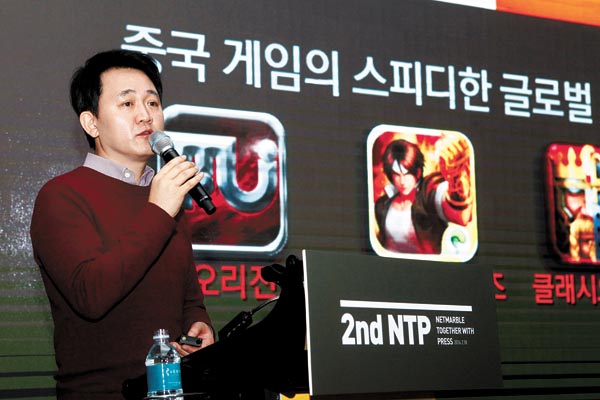 Bang Jun-hyuk, founder and head of Netmarble Games, announces the company’s plan to go public on Thursday at the GLAD Hotel in Yeouido, western Seoul. [NETMARBLE]

Netmarble Games, the country’s top mobile game developer, will go public in a deal that could fetch as much as 7 trillion won ($5.8 billion).

The game studio said Thursday that the proceeds will be used to boost its global marketing and to fund potential mergers and acquisitions.

“To develop into a global major player and scale the business, going public is inevitable,” said Bang Jun-hyuk, founder and head of Netmarble.

The plan follows the game studio’s record-high annual earnings last year, which were backed by the strong performance of its flagship titles like “Everybody’s Marble” and “Seven Knights,” as well as new blockbusters like “Raven” and “Idea.”

Many are speculating which stock exchange the company will choose to list its shares.

“The decision has yet to be made, and we will discuss the issue after we select underwriters and advisers,” Bang said. “Nasdaq can be an option since it will help us gain name recognition abroad and save on marketing costs.”

The company held a closed-door meeting for potential underwriters to send out a request for a proposal to go public earlier this month.

In the proposal, the company listed Korea’s main Kospi as an option, but Bang said that the decision is not set.

Rival Nexon, for example, is listed on the Tokyo Stock Exchange.

To further consolidate their internal structure, Netmarble also announced the merger of its subsidiaries Netmarble Monster and Netmarble ST.

Seven of the top 15 games with the highest income on Google Play belong to Netmarble.

Despite the company’s stellar performance, Bang made it clear that Netmarble has a long way to go and needs to boost its brand recognition abroad.

To make the company more recognizable, the company says it will continue to use characters known around the world.

The chief also hinted that the company is in talks with Disney to use “Star Wars.”