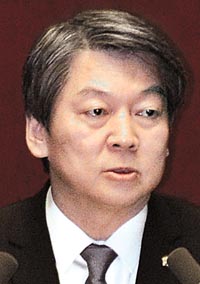 The co-chairman of the minor opposition People’s Party said Thursday that he was ready for bipartisan cooperation in coming up with solutions to deter additional provocations by Pyongyang and urged lawmakers to step forward to solve the problems on the peninsula.

In his first speech at the National Assembly since launching the People’s Party in early February, Rep. Ahn Cheol-soo also attempted to wipe clean his party’s platform concerning North Korea policy, which has been criticized as vague.

“The People’s Party strongly protests the provocations by North Korea - its nuclear test and long-range missile launch. In order to deter them, we are ready for bipartisan cooperation,” he said.

The ruling and opposition parties, Ahn continued, have to acknowledge that the joint statements previous governments - both conservative and liberal - issued with North Korea make up the legacy of the relationship between the two Koreas.

The minor opposition leader went on to add that it was lawmakers’ responsibility to acknowledge those achievements and make efforts to move forward.

What the people want is stability on the Korean Peninsula and gradual unification, Ahn said, adding that drastic change and unification was not a “bonanza” but could be a “disaster.”

He also addressed the controversy surrounding the U.S.-led Terminal High Altitude Area Defense (Thaad) anti-ballistic missile system and the discussions between the South Korean government and the United States for its deployment.

Such a situation cannot be solved with a yes or a no, he said in calling for the development of a standalone missile defense system.

The park’s closure, he added, does not serve national strategic interests and has brought financial loss.

His stance against the closure of the complex, however, was criticized by some analysts as merely a way to amass liberal votes in the Jeolla region - the home base of former President Kim Dae-jung, whose administration first formulated and carried out the Sunshine Policy - ahead of April’s general election.

The foreign policy plan, which was implemented by the Kim government and lasted until the Lee Myung-bak administration, was intended to foster profoundly closer relations with Pyongyang.