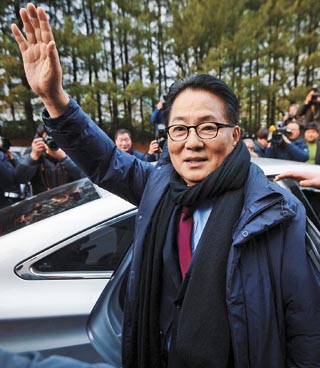 Independent lawmaker Park Jie-won waves his hand toward supporters as he walks out of the Supreme Court, which acquitted him of bribery charges on Thursday. [NEWSIS]

Rep. Park Jie-won, a three-term lawmaker and long-time supporter of President Kim Dae-jung, was acquitted Thursday of bribery charges in a verdict that effectively saved his political career just ahead of April’s general election.

The Supreme Court on Thursday sent the bribery conviction against Park to the Seoul High Court for a retrial, in a ruling that cleared him of all charges.

The prosecution investigated Park under the Lee Myung-bak administration in 2012 on charges that the 73-year-old took money from two bankers.

He was accused of pocketing 20 million won ($16,300) from Solomon Savings Bank Chairman Lim Suk in March 2008, and another 30 million won from Oh Moon-cheol, head of Bohae Mutual Savings Bank, in July 2010. The prosecution indicted him on both charges in September 2012 while he was serving as floor leader of the main opposition party.

The Seoul District Court acquitted Park of the charges on Dec. 24, 2012, which the prosecution appealed. In July, the Seoul High Court found Park not guilty in the case from 2008, but guilty in the case from 2010. The court handed down a one-year suspended prison term and a 30 million won fine - punishments that were heavy enough to take away Park’s seat as a lawmaker.

He eventually took the case to the Supreme Court, which acquitted him on both charges. The Supreme Court ruled that prosecutors failed to prove beyond a reasonable doubt that Park had received money, as both cases were based solely on the testimonies of the bankers.

“I appreciate the judiciary’s fair judgment,” Park said after the ruling.

“I am extremely sorry for troubling the nation and the people of Mokpo [in South Jeolla] over the past three and a half years. I am determined that this unfortunate episode will never take place again in the political arena,” he said, adding that he plans to run in the upcoming election.

Park subsequently visited the grave of President Kim, whom he supported for the majority of his time in politics.

The three-term lawmaker started his career in 1992 as a proportional representative in the Democratic Party and served in various positions assisting Kim.

He worked as spokesman when Kim was president-elect and served in the Kim presidency as public affairs senior secretary from 1998 to 1999.

Park served as culture minister under the Kim administration from 1999 to 2000 and as presidential chief of staff from 2002 to 2003.

Park has a long history with the prosecution.

He was indicted in 2003 on charges of receiving 15 billion won in slush funds from Hyundai Group shortly before the historic inter-Korean summit between Kim and former North Korean leader Kim Jong-il in 2000. He was later acquitted by the Supreme Court.

In 2004, Park was indicted on charges that he received bribes from conglomerates including SK Group. He was convicted of the charges and sentenced to three years in prison and a 100 million won fine, but he was later pardoned in 2007.

The bribery conviction hindered him from winning a nomination in the 2008 general election, though he still ran as an independent candidate and won a seat to represent Mokpo and make a grand political comeback.

He later joined the main opposition party and was re-elected in 2012.

Park left the main opposition Minjoo Party of Korea in January and remained politically unaffiliated amid the restructuring of the liberal bloc.

Because he was convicted by the Seoul High Court, most observers assumed he wouldn’t be able to win a nomination from either party.

His acquittal on Thursday, however, completely changed his political status.

With the Minjoo Party and the People’s Party fiercely competing over control of the Gwangju and Jeolla region ahead of the April general election, Park’s influence over voters sentimental to the late President Kim has become invaluable.

“Recently, our interim leader Kim Chong-in telephoned Park and delivered our wishes that he return to the party in the event that he is acquitted,” said Kim Sung-soo, a Minjoo Party spokesman. “We hope he will return to our party.”

“When I was operating my own party, I had already visited him in Mokpo and invited him to join me,” Chun said. “I congratulate him on the verdict, and I hope he will stand with us from now on.”

But despite the well-wishes, Park said he would remain independent.

“Without consolidating the opposition parties, we are destined to lose,” he said. “I want to make clear that I will stay on a neutral path as an independent and work hard to unite the liberals.”