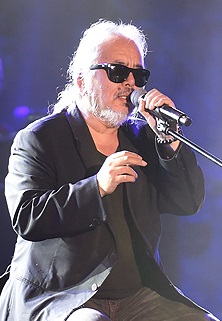 Legendary Korean rock star Jeon In-kwon is setting out on a national tour.
Jeon and his crew will kick off the tour, titled “Don’t Worry,” in Chungju, North Chungcheong, on March 12. They will then hold a concert at the Lotte Hotel in Sogong-dong, central Seoul, on March 20 and finish up the tour at the Goyang Aram Nuri Arts Center in Gyeonggi on April 23.
The rock star has always had a passion for live performances. The 71-year-old hopes the tour will be an opportunity for him to communicate with fans.
Jeon’s iconic song “Don’t Worry” was used in the recent megahit drama “Reply 1988” on tvN, reminding viewers of popular songs released decades ago. Many other songs by Jeon were also revisited and received a good response.
Feeding off the popularity, Jeon is now producing a new song, “Congratulations.”
The rock star debuted in 1978 and then joined the influential rock group Deul Guk Hwa in 1984. Although Jeon has faced many charges for drug use, his impact on the Korean music scene is rivaled by few.