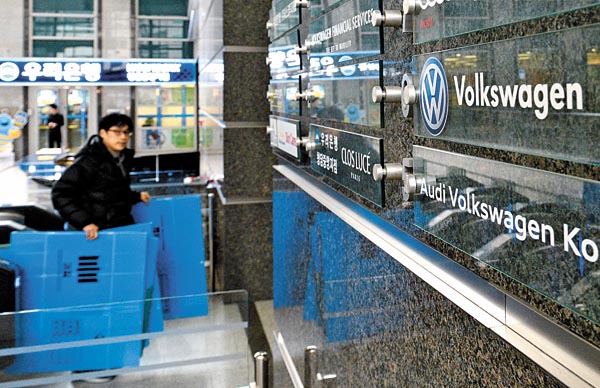 The offices of Volkswagen Korea were raided by prosecutors on Friday as part of their investigation into suspicions that the automaker violated the nation’s emissions regulations.

The raids come nearly five months after Volkswagen Group was accused of cheating during emissions tests of its diesel vehicles in the United States in September. That led to a recall of 480,000 diesel cars.

Korea was part of the emissions-rigging scandal, as the Ministry of Environment ordered a recall of Volkswagen and Audi vehicles equipped with the EA 189 engine on Nov. 23, while also telling the company to submit a recall plan.

The company submitted the recall plan on Jan. 6, but the ministry said it will file criminal charges against Volkswagen Korea CEO Johannes Thammer, as the recall plan was too flimsy and did not include details on why the emissions reduction device was not working properly. The ministry also accused Terence Bryce Johnsson, an executive at Volkswagen’s headquarters in Germany.

The company said 15 of the Audi Volkswagen cars sold in Korea were equipped with the problematic engine. The ministry imposed a fine of 14.1 billion won ($11.4 million).

The ministry said the company’s executives violated articles 46 and 48 of the nation’s Clean Air Conservation Act, which could mean up to a seven-year prison term or a fine of 100 million won.

“The recall plan should have included details about the causes of technical defects and plans for how they will fix the problem, both of which were nowhere to be found,” said Hong Dong-gon, head of the traffic environment division of the ministry.

“We decided this was equivalent to not having submitted a recall plan at all. In the one sentence that discussed the defective engines, it was saying something completely unrelated to these particular defects.

“Regarding corrective measures, they should tell us how they will fix their cars, but the plan only said that the company lacked the software necessary to fix Volkswagen models in Korea.”

“We are currently trying to find out what is going on regarding the prosecutors’ investigations,” a spokesman for Volkswagen Korea said. “But we will cooperate with the prosecution.”