Hong advises Postech grads to ‘own your life’

Hong advises Postech grads to ‘own your life’ 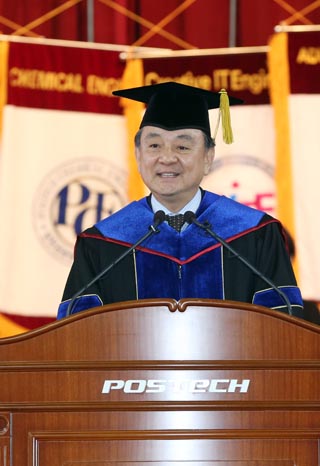 Hong Seok-hyun, chairman of the JoongAng Ilbo and JTBC, delivers his speech at the commencement ceremony of Pohang University of Science and Technology on Friday as he accepts an honorary doctoral degree from the university. [kIM SEONG-RYONG]

Hong Seok-hyun, chairman of the JoongAng Ilbo and JTBC, received an honorary doctorate from Pohang University of Science and Technology (Postech) on Friday.

“Chairman Hong has made his contributions to social development in various fields, as start-up entrepreneur, scholar, journalist, government official and businessman, after graduating with a degree in engineering. His successful challenges to various fields will serve as an outstanding role model for students,” said Postech President Kim Doh-yeon at a commencement ceremony held at the university’s gymnasium in Pohang, North Gyeongsang.

It is the fourth time Postech has awarded an honorary doctoral degree for the past 30 years since its foundation in 1986. But Chairman Hong is the first South Korean national to receive an honorary doctorate from Postech. Previous recipients have been U.S. citizens, including Roderick MacKinnon, Rockefeller University professor and Nobel Prize laureate in chemistry; Jeong H. Kim, former Bell Labs president; and Peter S. Kim, former president of Merck Research Laboratories.

In his acceptance speech, Chairman Hong advised students to “own their lives.”

Standing at the podium in front of 3,000 graduates, parents and faculty, he began his speech with a confession that “I wasn’t able to remember who gave a speech or what they talked about.” And then he said, “So no matter what I tell you today, the possibility that you will remember this speech is close to nil. But I do hope that my experiences from my past will be helpful to you.”

Chairman Hong disclosed the reason why he chose electrical engineering as his major. He mentioned his family history, the political turmoil of the time he grew up in, and how he was influenced by Dr. Kim Hee-wan’s patriotism and passion as a pioneering engineer.

“At that time in Korea, there was booming interest in electrical engineering… That generation became the leading force behind the rapid development of Korea’s semiconductor industry in the subsequent years… I hope that you will improve the nation and build a more prosperous Korea with your intelligence, passion and vision that you obtained from Postech.”

The first message Chairman Hong delivered was that “we should discover the true meaning of our own lives hidden within ourselves.”

“Confucius was able to understand the true meaning of his life at age 50. It was 18 years after that, at the age of 68, when he put the meaning into practice… Reflecting on my experience, people can be sincerely happy when they find a life they love and enjoy and devote themselves to it. Such people have a high possibility of becoming successful, regardless of which life they choose.”

The second message was “we must live an autonomous life.”

“As Linji, the Buddhist monk from the Tang Dynasty, said in the 9th century, no matter where you are or what situation you are in, facing adversary with a sense of ownership will help you take it as joy (sucheojakju ipcheogaejin).”

He emphasized that Postech has a tradition of sucheojakju spirit.

“At the time of Posco’s establishment, all the experts in the steel industry rejected the idea, saying it was preposterous.

“That sense of ownership for history generates challenge, determination, imagination and ambition. The driving force that made the impossible possible was the determination of the late President Park Chung Hee. He believed that no heavy industry could exist without steel, and without heavy industry, there would be no economic development and national security.

“The spirit of sucheojakju rejects the status quo, obsolete customs and populism. That is contrarian leadership. To be specific, it is a leadership that goes against common ideas, based on out-of-the-box thinking. Such ideas require lone determination.”

The 20-minute speech ended with an emphasis on life of sharing. Chairman Hong cited the words of Cardinal Stephen Kim Sou-hwan: “It has taken my whole life to come such a short distance from head to heart.”

“I was deeply moved by his words. Sharing happiness and sadness with your neighbors is a lot more precious than acting in one’s self-interest. With your head and heart in harmony, and by putting that attitude into action, I believe your future will be smooth sailing.”