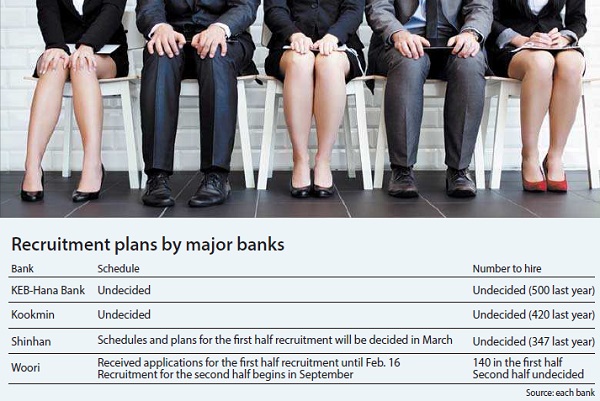 The recruitment process for the nation’s major
banks for the first half of the year has begun.
Woori Bank started first as it will be accepting
applications until Tuesday. The bank
will hire 140 full-time regular workers to
work in the individual financial service sector
at local branches nationwide. About 7,000
people submitted an application.
After initial filtering, it will hold two
rounds of interviews before it decides on the
final 140 successful candidates in late
March.
In early March, the nation’s No.1 bank,
Shinhan Bank will decide on its plans for the
first half of the recruitment process. The company
hired 144 people in the first six months
of last year. After their applications are submitted,
candidates will move on to two rounds
of interviews and a computer-based personality
exam.
In the second round of interviews, candidates
will spend a night at the company’s
training center for employees and will go
through further testing including impromptu
interviews and a group debate to show off
their abilities of logical thinking, creativity
and team-work spirits.
“It means that the tests begin as soon as
candidates hop on to the bus going to the
training center,” said a spokesman of Shinhan.
“They certainly need to show their abilities
with confidence, but that should come
out based on a polite attitude.”
KEB-Hana Bank and Kookmin haven’t yet
announced their recruitment plans for the
first half season. KEB-Hana hired 500 people
in the second half of last year. “We will develop
the recruitment plan for the first half
season after we finish teaching necessary programs
to those newly hired 500, who will be
dispatched to divisions to start working,”
said a spokesman of KEB-Hana.
Kookmin Bank hired 120 people in the
first half and 300 in the second half last year.
“We are still discussing whether we should
hire regulars or part-time workers in the first
half,” said a spokesman of Kookmin.
Among state-run financial institutions,
Korea housing Finance Institutions started its
recruitment process earliest. It will receive
applications for 40 interns until March 4 and
they will become candidates to be regulars
after the internship.
It said 12 percent of the regular positions
will be filled with disabled candidates and
children of military veterans or public servants
honored by the country.