Getting a close look at this historical city

Getting a close look at this historical city 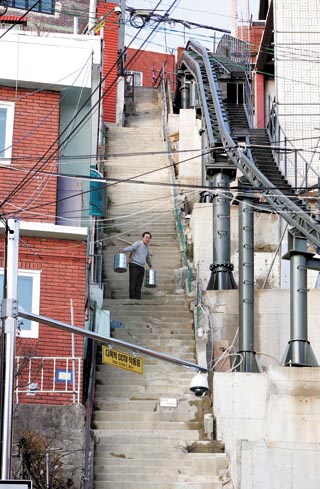 The 168 Stairs, part of the Ibagu Trail in Busan, is known for its steep incline. To make it more convenient for residents who have to use the stairs daily, the city is in the process of building a monorail, seen on the right. [SON MIN-HO]

This southern metropolis is mostly known for its port, beaches and festivals, but there is also rich history sprinkled in every nook and cranny of the narrow streets, far away from the water.

To better cater to travelers looking for something new and different from the usual Haeundae Beach scene, the Busan Tourism Organization in June 2014 launched a tour program called Wondosim Story Tour, which roughly translates to tours that tell the stories of people who lived in the old downtown. As of November last year, the tour welcomed over 10,000 participants, proving there was enough demand for learning more about the history and everyday lives of residents of the city.

The tour program has five different routes. One takes participants to local food markets, streets lined with bookstores and the famous Gukje Market, which was featured in the Korean movie of the same title in 2014. Another program runs along the Ibagu Trail and into the inland hillside town adjacent to the city’s gathering spot for Europeans and Chinese, across from Busan Station. And for those looking for spectacular seaside views, the route along Heenyeoul Village, takes visitors along the mountain cliffs facing the southern sea.

All these routes are meant to be walked. With easy access to maps of each route, visitors can, of course, decide to walk the trails by themselves. However, considering that the tours are meant to tell the stories of locals and how their daily lives contributed to the history of Busan, a tour guide provided by the Busan Tourism Organization or a prearranged tour on the weekend is recommended.

Top: A guesthouse where visitors can stay overnight on the Ibagu Trail. Center: The Heenyeoul Village tour travels through a residential area near the southern sea. Above: Before heading to the Ibagu Trail from Busan Station, visitors can stop by a street frequented by Europeans and Chinese residents. [LEE SUN-MIN]

Considering that older residents have witnessed changes and developments in each neighborhood, the local tourism organization decided to invite them to be tour guides, but they are more like storytellers. They regale accounts of life in the area down to the smallest detail, from which kid in town was the troublemaker to which town chief, in their opinion, worked the hardest on building up the tourism infrastructure. They share what has been maintained during modernization and what has been destroyed for the sake of development.

One of the most popular routes right now is the Ibagu Trail. The 20th-century architecture that remains shows the city’s early modern history. Although only the walls are left, there is Namseon Storage, which was the first seafood storage facility, set up in 1910. The former Baekje Hospital, which was the first modern-style private general hospital, shows how buildings made with red bricks were first introduced to Korea. The building was later used as a Chinese restaurant, a military hotel, a security office and then as a wedding hall. The city is currently restoring the building so that visitors can see how the structure was used throughout the past century.

Away from the modern buildings, one can head toward neighborhoods down the curvy hillside Sanbok Road. The area became famous for its steep stairway, the 168 Stairs, located in the center. It is impossible to run down the stairs or even walk without holding on to the railing. Since it is inconvenient for residents there to get around, the city has been building a monorail right next to the steps, which will be completed within this year. There are guesthouses, restaurants and other rest areas and coffee shops in the area so that travelers can rest their legs for a while.

While the Ibagu Trail has been a longtime favorite, the Heenyeoul Village tour has been garnering more attention in the past few months, especially after it was featured in the popular reality show “Infinite Challenge” in December and the 2013 Korean movie “The Attorney.” This is an area where the underprivileged gathered to live away from the busier parts of Busan, making their homes right beside the ocean despite the risk of floods. While most houses are for residential use, some artists have been moving in here recently, making the town trendier.