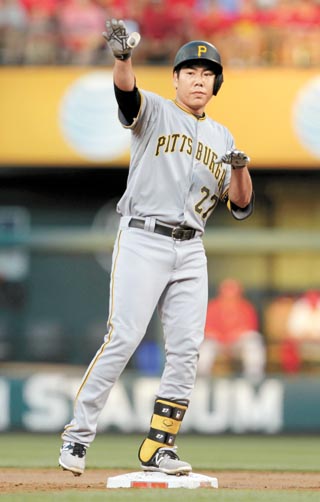 Pittsburgh Pirates shortstop Kang Jung-ho is diving into the next season at the MLB with high hopes. [AP/NEWSIS]

While it may be too early to call Pittsburgh Pirates shortstop Kang Jung-ho a Major Leaguer, he certainly paid his dues as a rookie last year.

Making his debut in the Big League on Apr. 9 last year, Kang became the first Korean batter to step on the Big League field straight from KBO to MLB without playing in other leagues such as the NPB in Japan.

He recorded his first MLB hit four days after his debut in Apr. 13. From then on, it appeared to be smooth sailing. He hit his first home run within a month after his first hit on May. 4th. His first multiple homerun game came on Aug. 23 when he sent his 11th and 12th homer over the fence. And the highlight of his first year at the MLB came on Sep. 10 with his first grand slam.

However, no one could have foreseen that this would be his last home run of the season. Kang’s season abruptly came to a close eight days after his historic grand slam. He tore his medial collateral ligament in his knee in a double play attempt against the Chicago Cubs when Chris Coghlan of Cubs crashed into Kang while sliding.

His season ended with the record of 0.287 Batting-Average (BA), 15 Home-Runs and 58 Runs-Batted-In (RBIs) after 125 games. Were it not for the injury, he could have recorded nearly 20 homers last season. Kang was also one of the three finalists for the National League Rookie of the Year award, placed third in the voting after Chicago Cubs Kris Bryant and San Francisco Giants Matt Duffy.

The rule states that when a batter slides in the field, he has to aim for the base or must demonstrate the intention of touching the base.

Kang’s return in the upcoming season is much anticipated. According to MLB.com, Kang will be fifth in the batting order after Andrew McCutchen and Starling Marte. Kang was third in home runs last season for the Pirates after McCutchen and Marte, who sent 23 and 19 balls over the fence.

Kang frequently went in to the game batting fifth last year. His BA, 0.309, was higher than his season average in the 58 games he batted fifth. Kang was also fifth in the lineup while he was in Korea playing for the Nexen Heroes after Park Byung-ho of the Minnesota Twins.

Expectations for Kang’s performance are also high according to the projections made by various baseball websites.

While baseball-reference.com forecasted Kang’s next season stats as 0.276 BA, 14 Home-Runs and 52 RBIs, the fangraphs.com projected higher, estimating a 0.281 BA, 17 Home-Runs and 79 RBIs from the shortstop.

The Pirates know they will need Kang healthy and sound next season. The team expects Kang to return in late April, although it wouldn’t mind having him for the opening game in April.

He is currently with the team at McKechnie Field in Bradenton, Florida, for the Pirates Spring Camp. When JoongAng Ilbo visited Kang, he was in the middle of a language class the team prepared for its international players after his rehabilitation session.

Pirates coaching staff seem to be lenient with Kang in training, exempting him from demanding physical training to help him recover. JoongAng Ilbo interviewed Kang at a bench outside the Pirates locker room.

Q. How is your recovery after the surgery on your knee?

A. I began training out in the field few days ago. I take it easy though. Once my condition improves, I will start batting practice and base running. At this moment, my physical condition is not 100%.

I think the team and the fans would like to see you in April in the opening game. What are your thoughts?

I try to be patient. I need a full recovery. Home runs and batting averages are something to think about afterwards.

Going through rehabilitation for five months must have been tedious. How did you cope with that?

Honestly, I wanted to return to Korea. But if I did go back, I would have spent time meeting people and my recovery would have been delayed by that much. I needed to stay here and fully concentrate on my recovery. That’s the only way for me to do well next season.

What did you do while you stayed in the States?

I went sightseeing around Pittsburgh and took a boat to go fishing. I also went to a zoo. People here in the United States spend much more time enjoying relaxed free time and so I tried to follow their lifestyle.

A lot of Korean players are coming to the MLB this year. How does that make you feel?

It’s great. We have been discussing our training schedule lately. I actually met Park Byung-ho last week. I have been suggesting Park and Kim Hyun-soo of Baltimore Orioles challenge the Big League. Now that they have signed lucrative contracts, they better treat me big (laughing).

How do you think they will do in the Big League?

They definitely have what it takes to compete here. They are going into the season as starters so their MLB career is taking off at a better pace than mine. I started off as a backup. I was heavily criticized about my batting posture because of its motion when I first began training here.

How does your batting form look now?

I realized that the batting posture is not so important. It is adjusting my batting according to the pitcher’s style and situation that is most pivotal.

Do you have any advice for Park and Kim?

I experienced fastballs by star MLB pitchers for the first time in April 2015. There is no doubt that they are fast. But the more you stand on the plate, the easier it gets for you to hit those balls. Once I got used to the 95 mph pitching, 93 mph balls seemed slow. Park and Kim don’t need to be concerned because they cannot hit the ball in the beginning of the season. It will come in time.