Sweet 16 for Egis to bring home the title

Sweet 16 for Egis to bring home the title 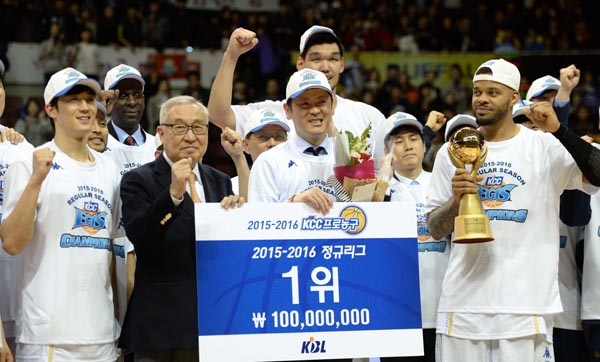 In their final game against Anyang KGC, Andre Emmett led Egis with 30 points, 10 rebounds and 5 assists, while Ha Seung-jin grabbed double-double with 24 points and 21 rebounds to secure its 86-71 victory. Guard Chon Tae-poong added 12 points to the board.

Although Egis had won KBL play-off titles in the past, they have never claimed the regular season title until Sunday.

Egis’ journey to the top was truly an epic rise of underdogs. Egis have won KBL play-off titles five times previously, but they were not considered championship material as they had been stuck at the bottom of the KBL ranking, in 10th, 7th and 9th position for the past three seasons.

Even this year was a rollercoaster ride for Egis. The team stayed in the middle of the KBL ranking until the middle of the season before they began a 9-game winning streak to grab the No.1 spot to tie with the Ulsan Mobis Phoebus. Egis also won 19 out of their last 23 matches.

One of the wild cards this season for Egis was Andre Emmett. Standing at 1.91 meters (6 feet 2 inches) Emmett is considered short for an import. Regardless, Egis manager Choo Seung-kyun picked Emmett in the first round of the foreign player draft. The 34-year-old import has been dominating the board since then, scoring 30 points on average in the past 20 matches. He is the lead scorer for the team and ranked second for scoring in the league, averaging 25.64 points.

McDowell, an Alabama native, played in the KBL from 1997 to 2004 and is considered to be one of the most popular foreign players in the history of KBL.

Although Emmett is unable to receive the Most Valuable Player (MVP) award since he is a foreign player, his remarkable plays marked him as the most plausible candidate for the honor this season. Manager Choo commended Emmett as the “best foreign player in the KBL history.”

Another player that assumed a pivotal role in Egis’ win was Chon Tae-poong. Chon played for Egis for three seasons until 2012 before being traded to the Goyang Orion Orions and then to Busan KT Sonicboom. Chon became a Free Agent (FA) before this season and finally returned home.

Although Chon did not see as much playing time as he anticipated, he was there for Egis whenever the team needed a game-saving shot beyond the arc. Chon drained a three pointer in the game against the Orions on Feb. 16th to secure its No.1 spot when Egis were 1 point behind with 1.5 seconds left in the game. Naturalized in 2009 from the U.S., Chon is considered a role model for many multi-cultural families in Korea.

Finally, Egis had Ha Seung-jin whenever the team needed the big man under the basket. The former NBA Portland Blazers is the tallest player in the KBL standing at 2.21 meters (7 feet 3 inches). After his four-year career in the NBA and NBA D-League, Ha returned home to play for Egis in 2008. Thanks to his physique and determination, he often pulled off a big play. Egis could count on him to grab rebounds when in a pinch. Ha led the league in rebound with 7.55 average per game.

Owing to its newly earned championship title, Egis manager Choo is the first person in KBL history to grab a regular season title as a player and as a coach for the same team.

The KBL play-off season will begin on Feb. 25th after the awards ceremony on the 22nd.