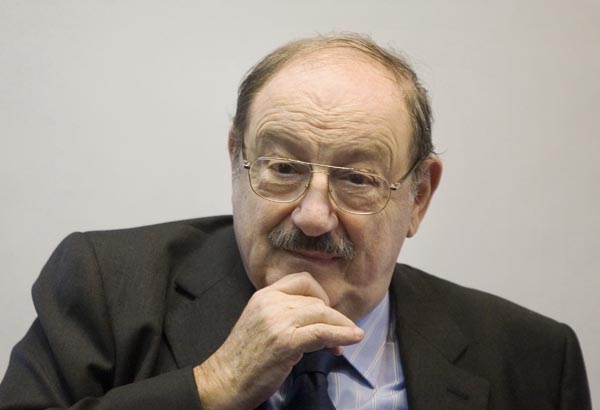 MILAN - Umberto Eco catapulted to global literary fame three decades ago with “The Name of the Rose,’’ a novel in which professorial erudition underpinned a medieval thriller that sold some 30 million copies in more than 40 languages.

The Italian author and academic who became one of Italy’s best-known cultural exports and keenest cultural critics, died at home in Milan on Friday evening after a battle with cancer, according to his family. He was 84. His death was earlier confirmed by his American publisher, Houghton Mifflin Harcourt.

Eco’s contribution to Italian literature was lauded by political and cultural figures alike. A memorial service will be held on Tuesday at Milan’s Sforza Castle, a grand citadel which is overlooked by Eco’s book-filled house.

Italian Premier Matteo Renzi said Eco “united a unique intelligence of the past and an inexhaustible capacity to anticipate the future.’’

Italian author Elisabetta Sgarbi, who founded a publishing house last year with Eco and other Italian writers, called him “a great living encyclopedia’’ who taught young people “the capacity to love discoveries and marvels.’’

Author of books ranging from novels to scholarly tomes to essay collections, Eco was fascinated with the obscure and the mundane, and his books were both engaging narratives and philosophical and intellectual exercises. The bearded, heavy-set scholar, critic and novelist took on the esoteric theory of semiotics, the study of signs and symbols in language; popular culture icons like James Bond; and the technical languages of the Internet.

“The Name of the Rose’’ made Eco an international celebrity, especially after the medieval thriller set in a monastery was made into a film starring Sean Connery in 1986. “The Name of the Rose’’ sold millions of copies, a feat for a narrative filled with partially translated Latin quotes and puzzling musings on the nature of symbols.

Eco said his work on the novel was “prodded by a seminal idea: I felt like poisoning a monk.’’

The book sparkled with references to his intellectual preoccupations. “Books are not made to be believed, but to be subjected to inquiry,’’ he wrote.

The last line of the book says, in Latin: “Yesterday’s rose endures in its name; we hold empty names.’’

That meant, Eco said, that ideas are the only imperishable things.

His second novel, the 1988 “Foucault’s Pendulum,’’ a byzantine tale of plotting publishers and secret sects also styled as a thriller, was successful, too ­­- and so complicated that an annotated guide accompanied it to help the reader follow the plot.

Eco was born Jan. 5, 1932, in Alessandria, a town east of Turin. Eco, whose family name is supposedly a Latin acronym of ex caelis oblatus, or gift from heaven, given to his foundling grandfather by a city official, said the insular culture there was a source for his “world vision: a skepticism and an aversion to rhetoric.’’ He earned a degree in philosophy from the University of Turin in 1954, beginning his fascination with the Middle Ages and the aesthetics of text.

Eco remained involved with academia, becoming the first professor of semiotics at the University of Bologna in 1971. He also lectured at institutions worldwide and was a fellow at elite institutions including Oxford University and Columbia University.