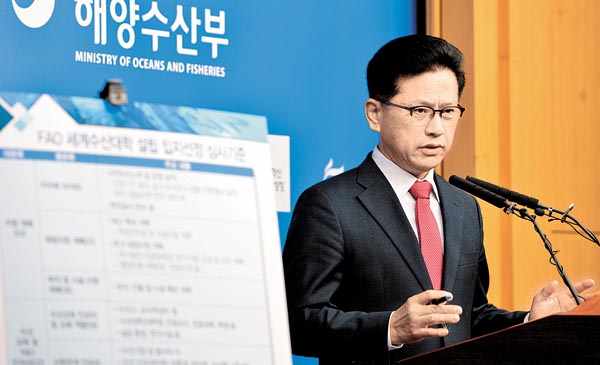 Yeon Young-jin, head of the fisheries policy office at the Ministry of Oceans and Fisheries, announces Busan as Korea’s candidate for the first world fisheries university. [NEWSIS]

Busan has been chosen as Korea’s candidate city to host the world’s first fisheries university to be established by the United Nations.

According to the Ministry of Oceans and Fisheries on Friday, the nation’s second-largest city on the southern coast beat two rival regions, South Chungcheong and Jeju.

Busan was selected to host the global university because of its financial, administrative and international relations capabilities, as well as its accessibility and convenient transportation infrastructure, said the Korea Maritime Institute, a state-run research firm that evaluated each city.

Busan offered free rental of a site for the university and buildings. It will also contribute 5 billion won ($4 million) to the development of the campus.

The Korean government plans to report its Busan plan to the UN Food and Agriculture Organization (FAO) meeting in July and December this year.

If no other country shows interest in hosting the university at the upcoming two meetings, the UN FAO will make a final selection on the Busan plan at its general meeting in July next year. If Busan is eventually chosen at the meeting, the campus is slated to open in September 2018.

The international university is estimated to create some 625 new jobs and boost production by 156 billion won in the first 10 years of its launch, according to the Fisheries Ministry.

“Hosting the university will be our growth fundamental for the next millennium, helping Korea take our oceans and fisheries management technologies to the next level,” said Minister of Oceans and Fisheries Kim Young-suk.

The university project first started in 2012, as the Korean government told the UN FAO that it wants to open a university as part of the nation’s official development assistance program.

The university will offer master’s and doctorate degree programs to some 100 civil servants from developing nations, mostly on maritime resource management and fish-farming technologies. It will recruit 90 master’s students and 10 doctoral students each year.

“There is a consensus among FAO member countries that the fisheries university campus should open in Korea, but we held a candidate city selection this time to show a possible educational curriculum and funding capabilities to the international community,” said an official at the Fisheries Ministry.