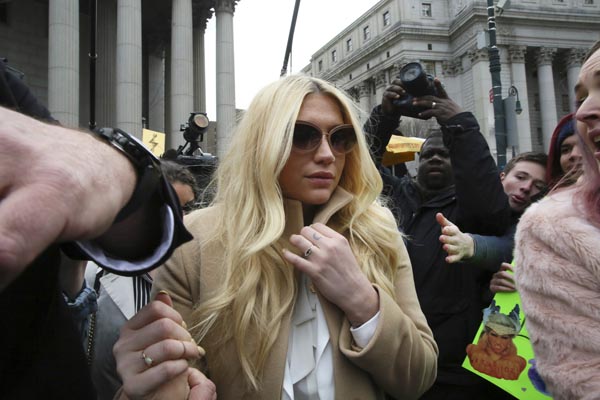 Pop star Kesha leaves the Manhattan Supreme Court on Friday. The singer is fighting to wrest away her career from producer Dr. Luke, whom she says drugged and sexually abused her. [AP/NEWSIS]

NEW YORK - Watching tearfully from a courtroom audience, pop star Kesha lost a bid Friday to be freed from her contract with a top record producer she says drugged, sexually abused and psychologically tormented her.

But the ruling doesn’t end the platinum-selling singer’s clash with hitmaker Dr. Luke, who denies her claims and says she’s smearing him to try to shirk her contract. Friday’s decision wasn’t the final word on their court fight in New York, to say nothing of related lawsuits in California and Tennessee.

Kesha declined to comment as she left court and hugged some of the scores of fans gathered to support her, many of them dusted with the “Tik Tok’’ singer’s trademark glitter.

The dispute is a strikingly personal fight in an industry with a long history of strife between artists and those who work with them.

“I cannot work with this monster,’’ Kesha said in a sworn statement in August that accused Dr. Luke of raping her a decade ago after giving her a pill that knocked her out, browbeating her to lose weight to the point where she didn’t eat solid food for eight days and holding her career hostage because she spoke up.

His abuse led her to develop an eating disorder and suicidal thoughts that prompted two months in a rehabilitation clinic in 2014, her lawyers say.

But Dr. Luke and his attorneys say the singer and her camp are trying to pressure him into letting her out of her contract.

“All of their horrific allegations of abuse, threats and other purported misconduct by me against Kesha are completely untrue and deeply hurtful,’’ he said in a sworn statement in December. He has not been charged with any crime, and his lawyer, Christine Lepera, says “he wants his name restored.’’

Dr. Luke’s attorneys note that Kesha herself said he “never made sexual advances at me’’ during sworn questioning in another lawsuit in 2011. Her lawyers say she was too frightened of him for years to disclose what happened.

Kesha Rose Sebert was an 18-year-old unknown from Nashville when she signed a contract with one of his companies in 2005, according to court papers.

Kesha continues to play some shows, but her lawyers say the contract has essentially stalled her career because she can’t stand working with Dr. Luke.