The rebirth of records and cassettes

The rebirth of records and cassettes 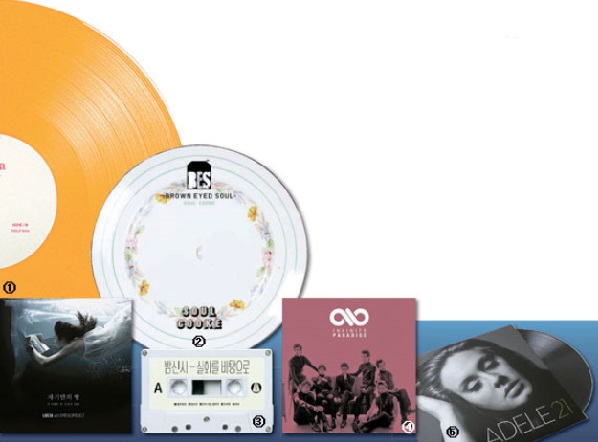 Mixing old with new, creating a seemingly strange combination of two polarized styles, is one of the latest trends in the Korean music industry.

In particular, LP records and cassette tapes on display on music store shelves might make some customers wonder what decade they’re in.

And they are not even the copies of old albums from the 1970s. Code Kunst, a fledgling hip-hop musician, released his new song, “Parachute,” on cassette tape last October. Once it went on sale in online shopping malls, it sold out almost instantly. Many other indie bands have likewise been releasing their music on cassette tape recently.

As popular as the formats are for indie music, LP records and cassette are not only for this genre of music. Brown Eyed Soul, a Korean R&B group, recently said they will release 888 copies of their album as LPs.

“I would love to produce LP records for every album if the circumstances allow,” said Naul, a member of Brown Eyed Soul. And the K-pop group Infinite released 10,000 LP records of both their first album, “Paradise,” and second album, “Be Back.”

Surging demands for the vintage sound unique to analogue production is the main catalyst for this trend.

“Tapes’ tangible element can differentiate it from streaming music, which is listened to once and forgotten right away,” said one indie band.

But for music fans who don’t have the proper equipment to play LPs or cassettes, the albums come with vouchers for streaming services so buyers can listen online.

Overall, the emergence of such music streaming services, although it has made accessing music more convenient for consumers, has brought about the demise of conventional forms of music production. Now the only way for the industry to survive is to cater to customers for whom music streaming is not enough.

Therefore, the industry decided to emphasize the collectability of LP records and cassettes and their retro appeal. Kim Young-hyeok, the head of Gimbab Records, noted the lower production cost and vintage sound as the advantages of LP records and tapes have over other collectable media like CDs.

The U.S. and European music markets are ahead of Korea on this front. The Grammy-winning artist Adele released her second album “21” as an LP and sold 116,000 copies in the first month of release. According to Nielson SoundScan, which tracks information on music sales, 1.2 million LP records were sold in the United States last year. The industry experienced 29.8 percent growth over the year before, the most since 1991 when Nielson began tracking back in 1991. CD sales, on the other hand, dropped by 10.8 percent last year.

Following in the footsteps of the annual Record Store Day founded in 2007 that helped drive the recent popularity of LPs in the United States, cassette tape industry launched its own version, Cassette Store Day, a few years ago.

With few facilities for producing LPs in Korea, most musicians produce theirs in the United States, Japan or Germany. But most of the cover designs are done in Korea.

“LP records produced these days are able to deliver high quality sounds,” one LP importer said. “More and more producers are also paying attention to the cover design of the records to provide an extra appealing factor.”