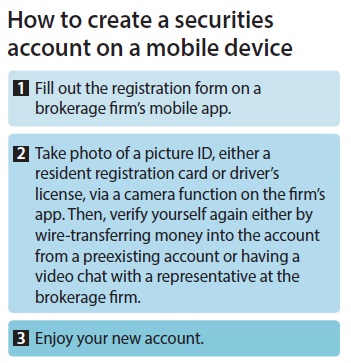 Starting today, customers no longer have to visit brick-and-mortar branches when opening a new securities account at local brokerage firms.

Instead, they will be able to open an account online 24 hours a day, 365 days a year.

The brokerage firms are following the lead of commercial banks, which started rolling out fintech-enabled electronic self-verification systems last year.

Another seven brokerages, including Hi, Hyundai, NH, Mirae Asset, Hana and Hanwha, are scheduled to begin by early March.

The new services are made possible by the Financial Services Commission (FSC), which eased its regulations last year to improve consumer convenience. But the FSC still required the brokerages to utilize a two-step verification system for safety purposes.

Most brokerages this time have rolled out a similar system, in which a customer first submits a photo of either a resident registration card or a driver’s license. Then, the customer can choose to complete their verification process by either wire-transferring money into the new account or by having a video chat with a representative at the firm.

Most products and money transfers are available under the new system, but customers still have to visit branches to invest in high-risk products like futures and options.

The new system is expected to help brokerages attract more customers and save on marketing and consignment spending.

“We look forward to seeing the number of new customers rise, just because they don’t have to go to the bank for a securities account,” said Kim Dae-kyu, a representative from Daishin Securities.

“Banks have nearly four times more branches than we brokerages do. As we lost out from such competition, many brokerages shut down branches in the past few years.”

There are 1,280 brokerage firm branches operating as of Thursday, according to the FSC. Major commercial banks run more than 7,460 branches.

“Most brokerages, regardless of size, have so far had to pay commissions to banks or insurance companies to consign the selling of their securities products,” said an official at the Korea Financial Investment Association who requested anonymity.

“Online-based firms like Kiwoom and eBest had to spend a lot in commissions. Firms like IBK, Hana and KB also had to bear costs by working with their bank affiliates, while Samsung and Mirae Asset did the same with their insurance affiliates.”

The brokerages are known to pay an average 12,000 won ($10) for opening each new account and an additional 10,000 won in management fees, according to industry sources. This makes each brokerage spend several billion won every year simply in commissions.

Although the new system helps, analysts warn that the firms should make information security their top priority, saying the ID captures and video chats are vulnerable.