In the world of IoT, possibilities are endless

In the world of IoT, possibilities are endless 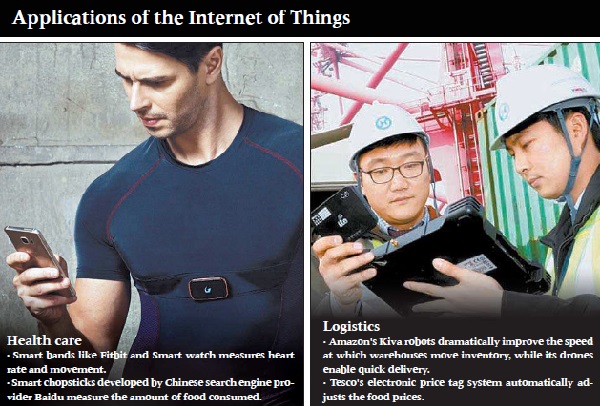 At the “Lucky Chouette” outlet in COEX mall, southern Seoul, there’s a smart mirror that shows a shopper everything he or she needs to know about a piece of clothing.

From the price to the quantities in stock, the mirror even shows different colors of the same item, suggesting accessories that might match nicely with it. The device can also track how many people picked a particular item off the rack that day.

A coin-size beacon placed on every hanger in the store enables the mirror to gather information from clothes and offer help to customers.

The smart mirror is one example of the nation’s emerging Internet of Things (IoT) technology. It was developed by a number of Kolon Industries affiliates and IT company SQIsoft, who worked together to create the first smart store in Korea. Other parts, including displays and sensors, came from small and mid-sized enterprises (SMEs) as well as large domestic conglomerates.

“A technological evolution comparable to the development of wheels in 4500 B.C. and metal in 1450 B.C. is just around the corner,” said IoT Analytics, an IoT consulting firm.

IoT technology holds great potential because it can be applied to every field. Possible applications range from a cup that shows how close someone is to meeting their daily water requirements to wallpaper that senses temperature to better regulate heating and cooling systems in a house.

Other than making daily life more convenient, the technology can also be applied to solving global challenges. One possible use is to reduce overflowing landfills by installing sensors in garbage cans around the city to detect improper disposal of waste.

“Information technology gains momentum every decade and the 2020s will definitely be the time of IoT,” said Lee Jung-hoon, a professor at Yonsei Graduate School of Information.

According to a market research firm International Data Corporation (IDC) and Gartner, the world’s IoT market amounted to $292 billion last year and is expected to expand to as large as $7 trillion by 2020.

Korea is seen as one of the most promising countries when it comes to IoT. According to the IDC, Korea ranked second in the IDC’s IoT readiness assessment after United States, measured by criteria such as internet and smartphone penetration rate.

But in terms of sensors, which is one of the core technologies needed for IoT development, Korea is three years behind the United States.

“IoT currently is an ownerless mountain and whether or not Korea can take over that mountain depends on how we [Korea] respond,” said Hong Hyun-sook from Korea Internet & Security Agency.

Gearbits is a smartwear product developed by underwear manufacturer “Good People” and IoT company Handysoft. The underwear detects biometric data such as heart rate, body temperature and motion of the wearer through an embedded sensor. The data is analyzed by the sensor, and notifies the wearer if there are any sudden changes. For example, if the wearer’s heart rate goes off the normal range of 60 to 100 beats per minute, an alarm sounds on his or her smartphone.

These kinds of products have been made possible by cooperation between the Electronics and Telecommunications Research Institute (ETRI), software companies and clothes manufacturers. In the case of Gearbits, Handysoft utilized the open source IoT platform developed by ETRI from 2010 and went on to commercialize the technology.

IoT can breathe new life into formerly ordinary objects, from washing machines and refrigerators to air purifiers and medicated patches. Once connected to a sensor and given the ability to share their data, new utility is created.

At the Consumer Electronics Show 2016, held from Jan. 6 in Las Vegas, companies including Samsung Electronics and LG Electronics demonstrated their latest IoT products.

Samsung’s Family Hub Refrigerator has a full HD screen attached to the door, which enables consumers to purchase goods right from their fridge and check what items are missing from afar using their smartphones.

One of the company’s futuristic IoT health care devices is the S-patch, which users can apply to their bodies. It includes Samsung’s Bio Processor, which enables the patch to track data including blood pressure and heart rate.

Other companies are targeting the farming and cattle industry. Turbosoft, a health care and biotech company, developed a wearable IoT device for dairy cattle to improve their rate of conception. The device is placed around cows’ necks, and helps regional farmers control their herds and correct problems they face when their herds go into heat.

When cows mount each other improperly, they often damage their shed or incur injuries. But the wearable device corrects the problem by detecting unusual movements and adjusting the temperature of the shed in response to discourage mating. The device works as part of the smart-farm system, software that collects and analyzes data to make farmers’ lives easier and more efficient.

There are numerous similar examples of IoT products in Korea that have either solved existing problems or changed working practices for the better.

Hanjin Shipping’s new port in Jinhae District, Changwon, South Gyeongsang, has been refitted with IoT devices from LG U+ and Nokia.

Trailer drivers, who transport cargo containers on site, check the coordinates of their next destination sent from the control center via tablet installed inside the car. This allows them to precisely move their cargo to the right location in a handling area as wide as 700,000 cubic meters (24 million cubic feet) - in exactly five minutes.

Before the upgrades were made in November, drivers frequently didn’t receive data from the control center, forcing them to call back and delay the whole process. But the new technologies have made it possible for the trailers to go from four deliveries an hour to six.

“IoT technology can be applied to satisfy different needs in the real world, but no company can do it alone,” said Lee Kyung-rok, a spokesperson from the National IT Industry Promotion Agency’s IoT division. “IoT companies’ fate will depend highly on the range of partnerships with different companies in the course of development and the solidity of the social and economic infrastructure that successfully links and supports those partnerships.”

One flagship sector that calls for cooperation between companies with different expertise is the smart home, where the nation’s three giant telecommunication providers - SK Telecom, KT and LG U+ - are actively expanding their presence.

From cooling and heating systems to home appliances, furniture and even curtains, moves to upgrade homes are constantly evolving.

LG U+, which currently has 100,000 IoT smart home subscribers, offers total 14 different services that allow users to lock their doors, turn off their gas and control electricity delivered to different outlets, among other options. The services are operated by SMEs, and about 16 more are in the works for the first half of this year.

Battle between the companies for supremacy in the IoT sector has now expanded to a war between countries. With the market’s size growing larger every day, global players are seeing the sector as a future growth engine and expanding their investments.

The United States picked IoT as a technology that will influence national competitiveness and set roadmaps to shepherd the industry. With its global IT giants such as Google and Apple, the country is hoping to revive its manufacturing sector through IoT technology development.

Germany is aiming to enhance its overall industrial productivity by 30 percent through a project named “Industries 4.0,” which promotes computerization or automation of manufacturing through IoT.

China, which is rapidly growing into an information and communications technology powerhouse, is also bringing changes to its conventional industries by connecting them to the internet among other technologies through its “Internet Plus” strategy. The government recently proposed setting up 193 complexes to showcase what futuristic Chinese factories will look like.

Korea is also making moves. The Ministry of Science, ICT and Future Planning established plans to develop IoT through 2020 based on the nation’s abundant ICT technology and IT-friendly atmosphere.

Gartner, a U.S. technology research and consulting firm, forecast a revolution based on IoT technology to be as dramatic as the changes seen with the emergence of Apple’s iOS-based smartphone within the next five years. With this in mind, what should Korea do to emerge as a country with a competitive edge?

First, there should be at least one domestic IoT service or platform that is also competitive abroad. But the top Korean companies have been slow to progress. Apart from the IoT home services provided by the three telecommunication providers, there are no other notable services in the smart home sector offered by a Korean firm.

Another barrier in the domestic IoT industry is the country’s lack of experience connecting bigger companies and start-ups in a symbiotic way. In the United States, on the other hand, there’s a long history of smaller and larger companies coming together as partners to create exciting new products.

Google acquired Nest Labs in 2014 for $3.2 billion. Nest Labs is most known for its self-learning thermostat, which automatically adjusts a house's temperature to the user’s preference after monitoring for some time. Some said the company had been overvalued, but Google is nurturing Nest Labs as its flagship company in the smart home sector.

But in Korea today, such cooperation is uncommon in the world of business.

“We [Start-ups] worry about being robbed of our ideas if we cooperate with conglomerates,” said Kim Yong-hyun, who runs Petfit, a start-up that helps people monitor their pets’ health.

“The relatively long history of hierarchical and closed corporate culture [in Korea] may hinder open discussion and challenge, which are necessary to develop the IoT industry,” said Kim Hee-su from DigiEco, a research center operated by KT.

“Complete technology or services in IoT is possible only when many companies join in the development process,”said Hong Hyun-sook from Korea Internet and Security Agency. “The government and companies may as well form a project that could support the early stage of the IoT business.”

The government can give incentives to companies who carry out projects based on creative cooperation. It could also connect large companies, SMEs and research institutes working on various applications of IoT.

U.S. company General Electric (GE) recently created “Brilliant Factories” by connecting IoT technology to its manufacturing facilities. It did so through “Predix”, an industrial IoT service platform it pioneered. GE was so successful that it began selling the platform to giants like Volvo and Procter & Gamble, creating a new revenue stream for itself in the process.

“There are blueprints for different IoT services but few conglomerates are attempting to implement IoT into their work environments,” said Jeon Sung-tae from Korea IoT Association, adding that only 5.6 percent of Korean manufacturing companies utilized IoT technology in their work.

The nation must also enhance its competitiveness in core sensor technology. Image sensing technology, telecommunications sensing and actuation technology are all essential to IoT development, but Korea remains roughly three years behind other developed nations.

Rigid policies and laws, as well as stringent regulation, are also obstacles that need to be addressed to facilitate growth of the IoT industry.

“In the actual business field, there are times we can’t proceed with our plans due to different views from related government officials,” said Kang Soo-nam, CEO of Modu Company, which developed a system to notify drivers the number of parking space available in parking lots. “The government should speed up the process of enacting a special law regarding the IoT industry.”