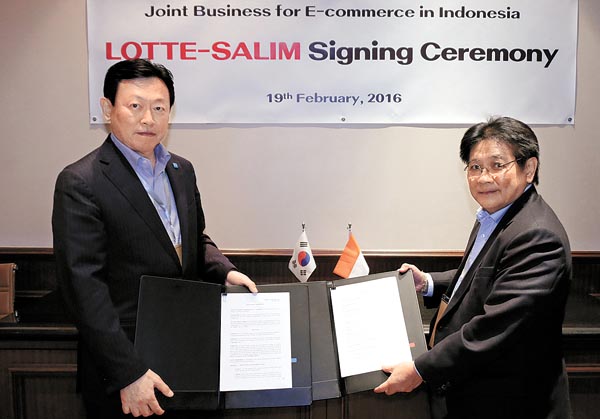 Lotte Group is planning a joint effort to enter the e-commerce market in Indonesia, which has a population of almost 250 million people.

The company plans to start building up the e-commerce venture with Indonesia’s biggest conglomerate, the Salim Group, during the first half of this year and expects to be in full operation by early next year.

According to the Korean retail giant on Sunday, the deal was agreed when Lotte Group Chairman Shin Dong-bin met with Anthony Salim, the chairman of Salim Group in Singapore on Friday, during the Asia Business Council meeting.

Lotte hopes to secure a strong foothold in the e-commerce market in one of Southeast Asia’s biggest markets by employing an omnichannel retailing strategy and establishing a stable delivery service by utilizing the existing networks Lotte’s and Salim’s offline stores. Lotte has one department store in Indonesia but has 41 retail stores. Salim Group has 11,000 Indomaret convenience stores.

The Korean retailer said it also plans to introduce selected products that are popular in Korea to the Indonesian market.

Under Chairman Shin, Lotte Group has been aggressively expanding its overseas businesses and Indonesia has been considered one of its key strategic markets.

The Korean retail giant first got involved in the Indonesian market in 2008 when it acquired 10 chain stores of the Dutch discount store Makro.

The advance into e-commerce comes as Indonesia’s online market has been growing rapidly. The country’s online market, which is estimated to have been about 3.2 trillion won ($2.5 billion) in 2014 is expected to expand to about 25 trillion won by 2020. This is largely due to the growing internet distribution, which already has exceeded 30 percent of its population.

Smartphone distribution, which speeds up the growth of e-commerce, was 21.3 percent in Indonesia as of 2014.

This figure is expected to reach 40 percent by the end of this year as faster LTE service was adopted last year.

The Salim Group is Indonesia’s biggest conglomerate that is involved in wide range of businesses from food, distribution, telecommunication, media, automobile manufacturing and property development. It is most famous for its instant noodles Indomie. Additionally Salim Group’s logistic company Indomarco ranks No.1 in Indonesia.