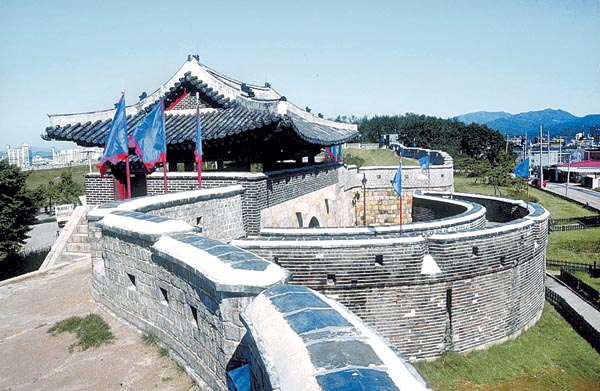 The Suwon Hwaseong fortress was designated a Unesco World Heritage site in 1997 and has since attracted millions of tourists from Korea and abroad. [JOONGANG PHOTO]

SUWON - When King Jeongjo became the 22nd ruler of Korea’s Joseon Dynasty (1392-1910) after succeeding his grandfather Yeongjo, one of his top priorities was to build a tomb for his late father, Crown Prince Sado.

The tomb had to be vigorous and elaborate enough to fend off the numerous court officials who had been involved in his father’s death and might possibly return for revenge. It also had to portray his political ambition to eradicate factional struggles within the kingdom and reinforce his sovereignty.

Crown Prince Sado was killed by his own father, King Yeongjo, in 1762, when he was trapped inside a wooden rice chest one hot summer day and later died. History records show that Crown Prince Sado was mentally ill and had randomly killed people in the royal palace. But Jeongjo believed his father was the victim of factional struggles inside the court.

King Jeongjo wanted his father to be able to rest in eternal peace, an idea that eventually led him to spearhead the construction of a 5.74-kilometer (3.57-mile) piled-stone and brick fortress, pierced by four gates and equipped with firearm bastions, bunkers, secret gates, multiple arrow launch towers, observation posts and floodgates, among other features. 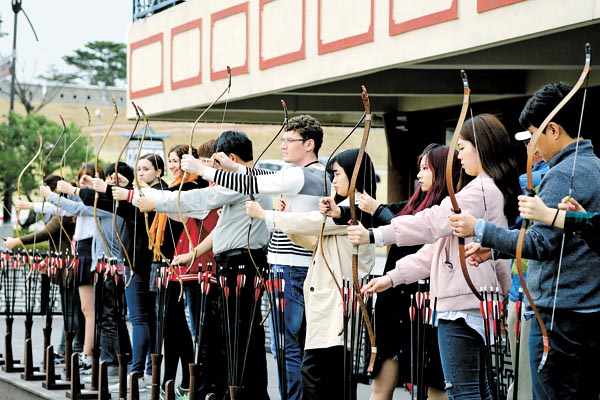 Visitors, including foreigners, participate in a traditional archery program at the fortress in Suwon, Gyeonggi. [SUWON CITY GOVERNMENT]

Today, the capital of Gyeonggi, located just south of Seoul, Suwon has built an entire tourism industry around what is now acclaimed as a representation of the “pinnacle of 18th-century military architecture, incorporating the best scientific ideas from Europe and East Asia,” according to descriptions by Unesco.

In 1997, the Suwon Hwaseong fortress earned the highest recognition for cultural and natural heritage sites, two centuries after it was built. This year, the globally renowned site celebrates the 220th anniversary of its construction.

In commemoration of this symbolic year, Suwon, with a population of 1.25 million, has designated 2016 as the Visit Suwon Hwaseong Year, in which tourists will be invited to an array of events that highlight the architectural excellence of the fortress, including festivals and educational programs.

Through those efforts, Suwon hopes to increase tourism tenfold, raising the number of tourists from approximately 1.5 million last year to a total 10 million this year. Nearly 10 percent of all tourists to Suwon are foreigners, mainly from neighboring countries like China and Japan.

“Our role model is Boston,” said Suwon Mayor Yeom Tae-young. “We find it necessary to reference Boston’s tourism policies because in a lot of ways, they’re quite similar to ours in the sense that the city is linked with cultural identity.”

Over the past two decades, the Suwon city government has funneled more than 1 trillion won ($814 million) into restorations by tidying up the stone walls and setting up plazas in main areas of the fortress, which stretches across 130 hectares.

Suwon has introduced martial arts performances, nighttime military-drill reenactments and traditional craft lessons, resulting in a consistent rise in visitors from the United States, China and Europe since 2012. Among some 125,000 foreigners who visited the fortress last year, Chinese tourists accounted for the most, with nearly 50,000, followed by Japan, Southeast Asia, the United States and Europe, according to data provided by the Suwon city government.

Tsang Jungchang, a college freshman majoring in English and Russian at National Taiwan University, said she preferred the Hwaseong fortress over her previous destinations in Seoul due to its historical vibe.

“All I really did in Seoul was shop,” said Tsang, who braved subzero temperatures on Tuesday to visit the fortress.

Having just returned from a brief tour around the stone walls amid gale-force winds and sporadic snowfall, the 19-year-old explained in a nearby coffee shop how the Hwaseong fortress ended up as the highlight on her six-day trip to Korea, which included stops at the bustling shopping districts in Myeong-dong, Samcheong-dong and Namdaemun Market in central Seoul.

“I’ve always been a history fanatic, and coming here gave me a better idea of the historical roots of Korea,” she said, adding that the cold weather was the least of her concerns. She initially learned about the fortress from a tour guide, she said.

Destined to have to deal with an influx in foreign tourists, Park Young-son, 52, the owner of the coffee shop, said the pressure to learn more about the fortress’ history was intensifying after four months running her business.

“If I were to learn a foreign language,” Park said, “I’d probably learn a bit of Chinese, since my main foreign clientele is from China. I’m usually communicating through their tour guides, so it’s not mandatory to learn, but still, it would be fun.”

Asked whether she had cracked open any history textbooks lately, Park pointed to a paper scroll hanging on the wall beside the counter, blushing at the overwhelming list of Korea’s former kings. “I read it every day and go ‘ah-ha,’” she said, laughing.

For more information (in Korean) about the Visit Suwon Hwaseong Year, go to 2016.suwon.go.kr.