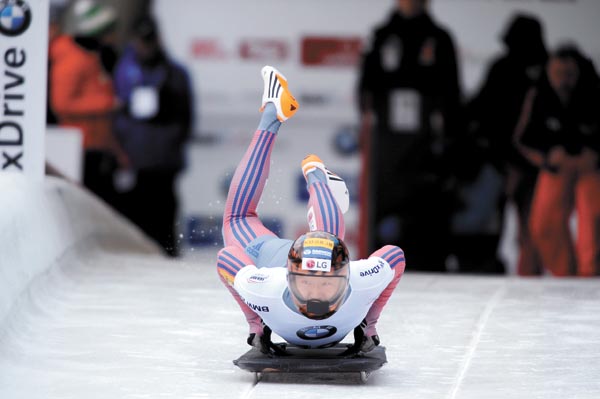 Yun Sung-bin made history on Saturday when he won a silver medal at the 2016 International Bobsleigh & Skeleton Federation (IBSF) World Championships in Igls, Austria.

His medal was a milestone as Yun became the first slider from Asia to take a medal in a Skeleton World Championship.

Yun’s win came after three years of perseverance since his entry to the event in Sep. 2012. Despite his breakthrough, however, Yun is calm and modest. “I hope people realize this is not something that I achieved on my own,” he said. “This is much bigger than just one person. I owe this to the coaching staff and my teammates who are always there behind the scene.”

Only a couple of years ago, in 2014 at the Sochi Olympics, the Korean national skeleton team was nowhere near the top 10 in the world. However, through systematic and detailed management and bold investment, the team was able to produce a world-class slider who could compete against the sport’s top athletes.

Skeleton is an event where a slider rides on a sled from a height of more than 130 meters (426 feet) through a 1,200 to 1,300 meter frozen track. The sport obtained its title because of the bony structure of the sled. While sliding down the ice track, a slider can travel as fast as 140 km/h (86 mph). A slider can steer the sled by changing the center of gravity by shifting their body weight using only arms and legs.

At the moment, there are only two Korean sliders competing in the World Cup series. They are Yun and Lee Han-shin. A coaching staff of seven supports the two racers. With Lee Yong as the skipper of the crew, coach Cho In-ho, a former skeleton racer who attended the 2010 Vancouver Olympics, and the rest of the team assisted Yun to claim his historical medal. The team’s main tasks include track analysis, equipment management, filming and medical support.

SBS commentator Lee Sei-joong, who is also a member of Korea Bobsleigh & Skeleton Federation (KBSF) performance-enhancement committee, described the coaching staff as the “Avengers” to describe their superhero-like capacity and dedication.

Manager Lee and coach Cho taught Yun the basics of skeleton. They pioneered skeleton and luge in Korea. They taught Yun, who had no previous experience with a sled, the fundamentals of the sport step by step.

In addition to Lee and Cho, the two foreign coaches that joined the team just before the 2014 Sochi Olympics gave Yun that added boost. Richard Bromely of England and Charles Zenon Wlodarczak of Canada each assumed their posts as sliding track course analysts. They also compose training programs for Yun depending on the course he will be competing on.

Bromely, who worked for a skeleton sled manufacturing company in England, also assists Yun as equipment technician. “Track conditions change frequently,” said Bromely. “The sled and its runners must be under constant maintenance for maximum performance.”

When asked about Yun’s ability as a racer, Bromely said, “He is agile and quick in responding to various situations. He never loses focus.”

For manager Lee, the presence of Bromely and Wlodarczak on the team is not something to take lightly. “It’s like having a thousand soldiers to back me up in a battle,” said Lee.

Yun’s start as well as his sled control improved drastically after the Brit and Canadian joined the team. In comparison to Yun’s time in December 2013 on the same course, his start time - the time measured from the moment a racer pushes off the sled to the moment he gets on top of it - decreased by 0.12 seconds. His record on the track was also shortened by 1.095 seconds.

The contribution of coach Kim Young-hyun should not be neglected either. As a former track athlete, the coach helped Yun adjust his posture to condense the start time. Kwak Ho-gun who is in charge of filming every run for analysis, and medical support Yang Hee-jun are also considerable talents behind the scene.