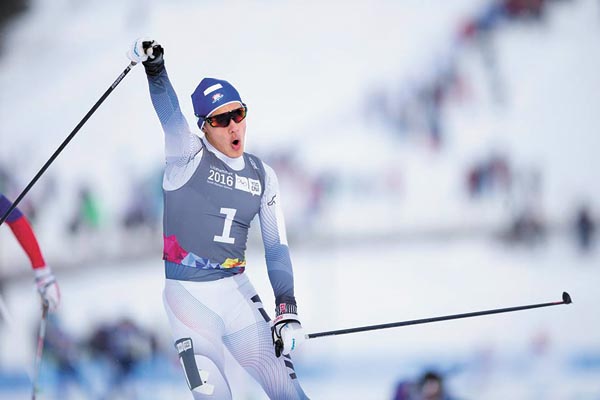 The 2016 Winter Youth Olympics in Lillehammer, Norway, was a medal festival for the South Korean national team.

For South Korea, the Youth Olympics was more than just a good result. It also gave added hope to South Korea for winter sports in the future.

In addition to the short track and speed skating events, which are usually gold mines for the Korean national team, the team also claimed medals out in the snow.

Kim Magnus, 18, whose father is from Norway and mother from South Korea, began skiing in 2011 and became the rising star as he dominated many competitions in Norway.

He placed first out of 280 athletes in 15-year-old division in the Norway national competition in 2013. Kim made his decision to represent his mother’s country last April and has been preparing for the 2018 Pyeongchang Olympics with the Korean national team.

“I think it is a once-in-a-lifetime opportunity to attend an Olympics that occur at home,” said Kim when asked about his decision to represent South Korea. “I would like to contribute in helping Korea perform better in skiing in global events.”

For girls, Kim Min-sun and Park Ji-woo shone the light on South Korea’s speed skating future. Kim won gold in the girls’ 500m and a bronze in girls’ mass start. She claimed her gold in the Youth Olympics on Feb. 13 when she defeated Han Mei of China by 0.78 seconds. Turning junior in high school, Kim already dominated the domestic event in the national spring competition last December after defeating her elders. She was dubbed “Little Lee Sang-hwa” by the International Olympic Committee (IOC) who introduced her as “having the same superstar potential in speed skating as Lee.” When asked about what it feels like to be compared to Lee, the Korean speed skating icon, Kim said, “I have been trying to race as advised by Lee. I will do my best to live up to such a high expectation.”

Only competitors from the age of 14 to 18 are permitted to participate in the event, which is sponsored by the IOC.

While the Winter Youth Olympics emphasizes exchange and friendship-building among young athletes around the globe, a country’s performance is considered an important barometer on how the country will perform in winter sporting events in the future. South Korean star skaters such as Shim Suk-hee became promising athletes for the Korean team after participating in Winter Youth Olympics.

Shim attended the inaugural Youth Olympics in 2012 in Innsbruck, Austria, where she demonstrated her potential by grabbing two gold medals for South Korea. Shim won a silver and a bronze in individual events and a gold in a team event for South Korea in 2014 Sochi Winter Olympics.