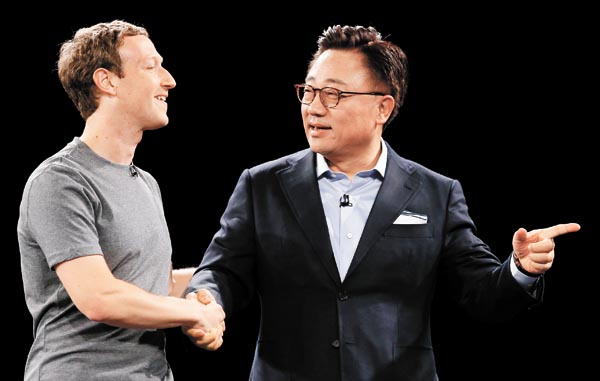 Not too long ago, it was the smartphone with the bigger screen, lighter weight and better resolution that made all the difference. More convenient interfaces and designs were also a key factor that determined success or failure.

But today, nearly a decade after Steve Jobs turned the tech world upside down with the world’s first smartphone, it seems that smartphone developers have reached their limit and the global market is near saturation.

Tech savvy consumers are becoming more difficult to excite and shun the hype of companies who try to portray small changes as groundbreaking technological advances that no users can live without.

Some of the latest smartwatch and smartphone developers have been scraping the bottom of the innovation barrel trying to break into new areas to distinguish themselves from hungry competition.

These attempts include the 360-degree virtual reality camera that the industry hopes will develop into a new market. This was evident at the Mobile World Congress in Barcelona, Spain - one of the most celebrated IT events in the world - where the two world-leading Korean smartphone manufacturers, Samsung Electronics and LG Electronics, unveiled their latest strategic smartphones, the Galaxy S7 series and G5.

Samsung continues to hold the world’s No. 1 spot by market share and its gap with No. 2 Apple has widened, according to Gartner’s most recent data. Samsung’s market share grew from 19.9 percent in the last three months of 2014 to 20.7 percent a year later while Apple saw its share of the pie shrink from 20.4 percent a year earlier to 17.7 percent in the last quarter of 2015.

Although the Korean smartphone manufacturer sells more phones than anybody else, it has been threatened by growing competition from manufacturers of more affordable smartphones, most of whom are based in China. And as the quality of the thrift phones becomes almost as good as the premium products, the foothold of major players’ is losing ground.

“The smartphone market has already passed the ‘early majority’ stage, where consumers accept any new technology passionately and has entered the ‘late majority’ stage where people think about practical value,” said Bae Eun-joon, a researcher at the LG Economic Research Institute. “This means new demand will dwindle.”

Meanwhile, in Barcelona, the ultrafast 5G wireless technology is drawing a lot of attention and the race includes the two leading Korean companies, SK Telecom and KT.

In fact, SK Telecom together with Nokia on Monday became the first to successfully transmit 20.5 Gbps in public space and not in a lab as it did previously with Ericssion earlier this month.

5G is considered to be 70 times faster than the current 4G LTE service and has the ability to change lifestyles.