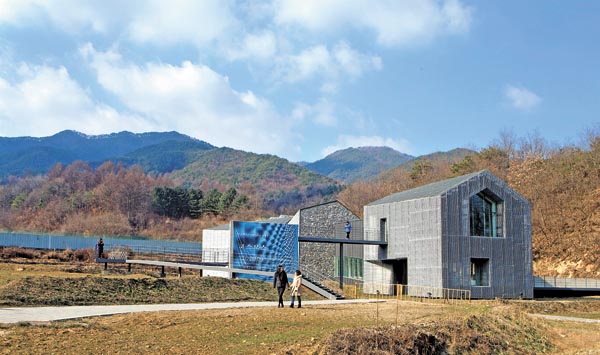 The Park Soo Keun Museum is in Yanggu Country, Gangwon, where Park, one of Korea’s most loved modern painters, was born in 1914. The museum site covers 9 square kilometers (2,200 acres), so visitors can not only enjoy Park’s works but the surrounding nature. [LIM HYUN-DONG]

HOENGSEONG, YANGGU AND WONJU, Gangwon - Spring is coming, but leaving winter behind is somewhat melancholic.

To make the most of the last bit of winter, a visit to Gangwon in the eastern part of the peninsula is recommended. Although the province is most well-known for mountains, there are also numerous art museums.

These museums exist in harmony with nature, with numerous walking trails and outdoor galleries. These serene outdoor spaces are the perfect places to enjoy the end of winter.

Hoengseong County, located in Gangwon is well-known for its birch trees. The rows of trees with black and white bark in winter look like a snowscape. 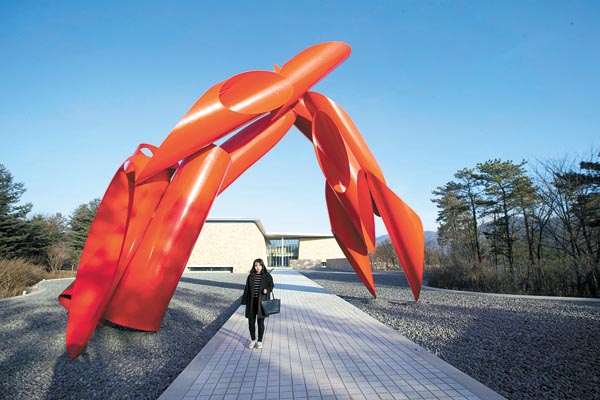 A visitor to Museum San passes under a sculpture by Russian-American artist Alexander Liberman. [LIM HYUN-DONG]

Birch trees live only above 45 degrees northern latitude. They grow in several places in Gangwon, the most well-known of which is located in Wondae-ri in Inje County.

Nestled in the birch trees of Hoengseong County, you can find the Museum Jajaknamusoup.

Jajaknamusoup means “a forest of birch trees,” in Korean. As the name indicates, the forest surrounds the museum.

Those little seedlings have grown to over 20 meters in height since then. In the late 1990s, Won planted 2,000 more birch trees, creating a full-sized forest.

Won is an amateur photographer. In 1996, he built his own studio in the forest, and later he built two more galleries, which together comprise the Museum Jajaknamusoup.

In the permanent exhibition hall, Won’s works are on display, while in the temporary exhibition hall, other artists’ works are exhibited.
In the beginning, the entrance fee was only 2,000 won ($1.62), but as too many visitors started to come, he increased the fee to 20,000 won.

Despite the price increase, people come to the museum consistently, with 10,000 visiting every year. 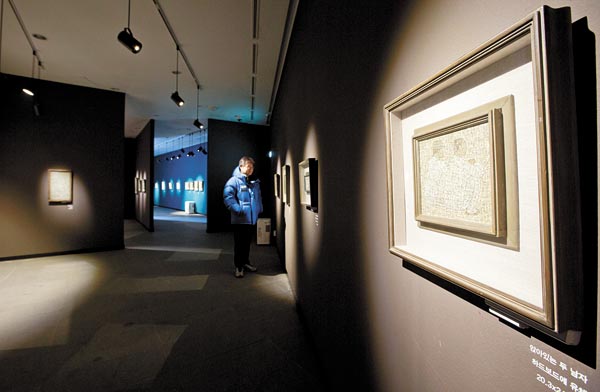 A visitor to the Park Soo Keun Museum views Park’s paintings in one of the museum’s exhibition halls. [LIM HYUN-DONG]

A half a day is enough to enjoy this museum, drink tea in the cafe and walk around the forest.

It takes about two hours to drive to the museum from central Seoul, which opens at 11 a.m. and closes at sunset. The museum is open Friday to Monday only. While the entrance fee is 20,000 won for adults, it is 10,000 won for children, and the cost includes tea.

There are also two guest houses that visitors can rent, and the cost per night is 200,000 won for two people and 260,000 won for four people.

The work of beloved modern artist Park Soo-keun (1914-65) are available for viewing in a park that was also his birthplace.

Not many people know that the artist’s hometown is in Yanggu County, Gangwon. He lived there in Jeonglim-ri until he was 20 years old. In 2002, the county built the museum in order to introduce the artist to the public.

His works depict mostly of ordinary people, such as a woman carrying a water jar or with a baby on her back. 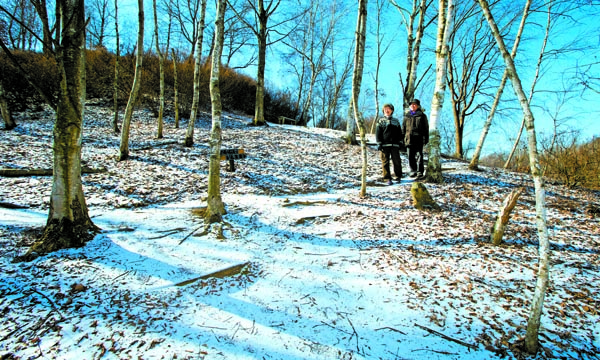 Museum Jajaknamusoup in Hoengseong County, Gangwon, is located in the heart of a birch forest. [LIM HYUN-DONG]

The museum features 110 works by Park, including oil paintings, drawings and engravings.

The museum sits on 9 square kilometers (2,200 acres). There are three galleries that exhibit the works of Park and other modern artists, as well as a pavilion that commemorates the 100th anniversary of his birth. The site is designed as a huge park, which 50,000 people visit annually.

“Yanggu County put in effort to develop a cultural arena, beginning with restoring the artist’s birthplace in 1997,” Seo Dong-sun, the director of the museum, said. “Then, the project evolved into a museum where visitors can enjoy the nature of Yanggu and the art works at the same time.”

Walking through the museum, it feels like being inside the artist’s paintings. The walls of the museum are made of rough granite that creates a similar atmosphere to that of Park’s paintings.

Inside the garden, there is a brook where the townspeople of Jeonglim-ri used to wash their clothes and bathe. It is reminiscent of Park’s painting “Washing Place,” which set a price record when it was sold at a local auction in 2007 for 4.52 billion won. The work held the record until last October.

Furthermore, where once there were rice paddies, now rye has been planted, bringing a hint of green to the winter season.

Park and his wife were buried together at a hillside outside the museum. From its top, one can see the town stretched out below, and it is possible to imagine how the artist once sketched the views.

Starting in downtown Seoul, it takes about two and a half hours to get to the museum by car. The museum is open from 9 a.m. to 6 p.m. and is closed on Mondays. The entrance fee is 1,000 won for adults and 500 won for children. Every other Saturday there are experience programs for children such as making t-shirts, which cost 5,000 won. Reservations for programs are possible only through the museum’s website. It is also possible to reserve a tour.

This museum in Wonju, Gangwon is hidden deep in the forest.

Around the museum, which is located at an altitude of 275 meters, the ridge of Mount Guryong can be seen soaring to 478 meters high. The museum itself seems like it is part of the natural setting. The name San as it is a composite of the words space, art and nature.

The museum consists of artworks collected by the Hansol Group adviser, Lee In-hee, 89, for over 30 years. Lee decided to construct a museum in 1994 and asked architect Tadao Ando to design it.

“I had energy and nature in mind when I designed the museum,” Ando said. “I wanted children to run around and be overjoyed with nature.”

As Ando wished, children enjoy coming to the museum. There are artworks on display outside that stimulate the imaginations of young visitors. For example, there is a 15-meter-high statue with arms that spin in the wind.

“Children can study flowers and stones in the Flower Garden, the Water Garden and the Stone Garden,” said Lee Young-hun, who works in the museum’s advertising department. “Also, they can enjoy the artworks outside.”

Thus, over 100,000 visitors come to the museum a year, 70 percent of which are families with kids.

If the exhibitions outdoors are for the children, James Turrell’s works indoors are for the adults. Turrell is well-known for using light and space in his works. There are four of them on display: “Sky Space,” “Horizon Room,” “Ganzfeld” and “Wedgework.”

In addition, on Friday and Saturday afternoons there is a special “Sunset Program” only for adults.

Just before sunset, visitors who made reservations in advance enter the “Sky Space” room along with museum staff. There is a hole in the white dome-shaped roof, through which one can observe the kaleidoscopic sky above along with colorful lights from the installation.

“Only at the sunset hour can you see this mysterious art of light,” museum official Cho Young-jun said.

Lying down on a yoga mat and looking up at the night sky is the perfect way to enjoy the natural setting of this museum.