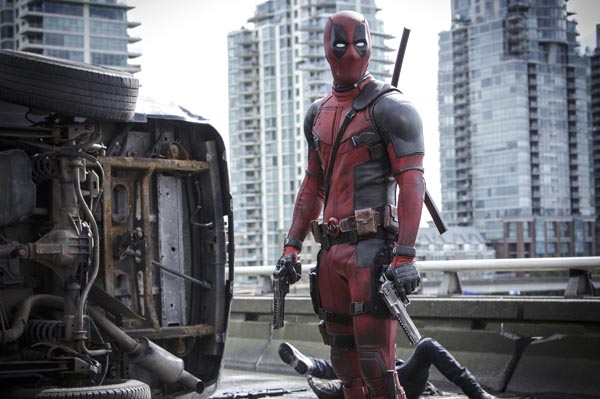 The comic book adaptation attracted 1.06 million viewers in Korea from Friday to Sunday, representing 43.6 percent of the total movie-ticket sales for the period, according to the Korean Film Council’s statistics.

In North America, the movie from 20th Century Fox starring Ryan Reynolds as a foul-mouthed mercenary continued to dominate movie theaters for a second week, earning an estimated $55 million. Having already grossed $235.4 million domestically, “Deadpool” - made with just $58 million - is poised to become one of the most successful R-rated movies ever. Globally, the film has made $491.1 million thus far.

In second place at the Korean box office was local crime comedy “A Violent Prosecutor.” The movie starring Hwang Jung-min and Gang Dong-won has sold a total of nine million tickets over the last three weeks since its release.

And in third place was the new release “Zootopia,” an animated film that tells the story of the first rabbit police officer in an animal world. The Disney animation was released here two weeks earlier than in the United States.

Among new releases in North America, the faith-based drama “Risen” debuted with $11.8 million. The film, in which Joseph Fiennes plays a Roman soldier investigating the death and resurrection of Jesus, was made for about $20 million by Sony’s Affirm label, which targets evangelical Christian moviegoers.

A24’s critically acclaimed Puritan thriller “The Witch” opened with $8.7 million, marking the biggest opening of the indie label behind the Oscar-nominated drama “Room.” A24 celebrated Robert Eggers’ directorial debut - an austere 1600s horror film, rigorously authentic to the period - as not only the company’s biggest weekend in its three-year history, but one that put “The Witch” on course to be “the most successful film of all time with a goat in a starring role.”

It may have been too much like an art house film for some horror fans, though, as “The Witch” received a poor C-minus CinemaScore from audiences.

Edging out the three debuts was Fox’s “Kung Fu Panda 3,” which made $12.5 million in its fourth weekend. The animated sequel, which has made $117.1 million in total in the United States, will lose its near-exclusive window of family moviegoing next weekend when Disney’s “Zootopia” opens there.