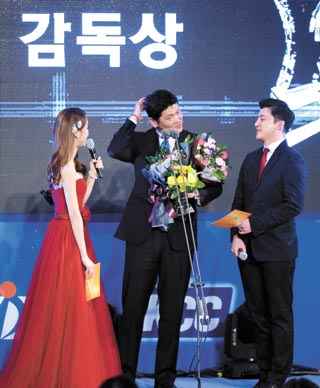 Jeonju KCC Egis head coach Choo Seung-kyun is honored with Coach of the Year award at the KBL Award Ceremony on Monday. Choo led the Egis out of its slump to claim the first regular season title in the history of the franchise. (NEWSIS)

When head coach Choo Seung-kyun was still a player for the Jeonju KCC Egis, his nickname was “Quiet Man.” Choo’s plays were not as extravagant as those by Lee Sang-min, but he handled the team’s dirty work like defense and rebounding while steadily putting up double-digit numbers on the board.

Now the skipper for the Egis, Choo has been anything but quiet.

Although the Egis were in the middle of the pack through the first half of the season, they grabbed victories in their last 12 games and claimed the regular season title for the first time in franchise history. After the team’s achievement, Choo was named the Coach of the Year for the 2015-16 KBL regular season.

Choo was given the honor over Yoo Jae-hak of Ulsan Mobis Phoebus, who competed closely against the Egis for the regular season title. Yoo is a four-time Coach of the Year award winner who has led the Phoebus to take the championship title for the past three seasons. Despite losing key players such as Moon Tae-young, his strong leadership and aggressive coaching style led the Phoebus to still place second in the regular season this year.

Choo being honored with the award is significant because this is his first official season as head coach for the Egis. Choo took over from Hur Jae, who stepped down at the end of last season because of the team’s poor performance. The Egis finished ninth in the league, which was humiliating for a former basketball powerhouse with five championship titles under its belt.

Before the season began, the Egis and Choo decided to put the past behind them. “We had to go back to the basics,” said Choo in an interview on Feb. 14. “We wanted to let the past go, not just the bad but also the good. We needed to forget that we were once a juggernaut in the KBL and start anew.”

Choo made some bold moves before the season began. He picked Andre Emmett, who is considered short for a foreign player at 1.91 meter (6 feet 2 inches), in the first round. He also brought back Chon Tae-poong, who has been playing for different teams for the past three seasons.

The decisions paid off. Dominating the board throughout the season with the average of 25.72 points, Emmett was named the Best Foreign Player of the Year. Although Chon lost the MVP award to the Phoebus guard Yang Dong-geun, he was always there to rescue the Egis from sticky situations. Chon received 48 votes to Yang’s 49.

Choo was a “one-club man” back in the day. He never played for a club other than the Egis in his 15 seasons as a pro. Choo won five KBL championship titles, a league record, and is the first person to win a championship with a team as both player and coach.

Choo has been very vocal this season. “I have been trying to cheer up my players,” said Choo when asked about his coaching style. “But I do not hesitate to yell at them when necessary. I need them to take on dirty tasks even if they do not want to. We need that mind set to win. I also know that I am still a rookie coach. I must stay modest and focused.”

After receiving his award, Choo said, “my players and their confidence were the driving force behind our title. The team has been struggling in the past three seasons and I know that must have been devastating for some of my players who have been with the team the entire time. We have overcome many obstacles to get to where we are today.”

As the regular season champion, the Egis automatically advance to the semi-final for the league championship. The team will play its first playoff game on Mar. 7 against the first round winner between Anyang KGC and Seoul Samsung Thunders.