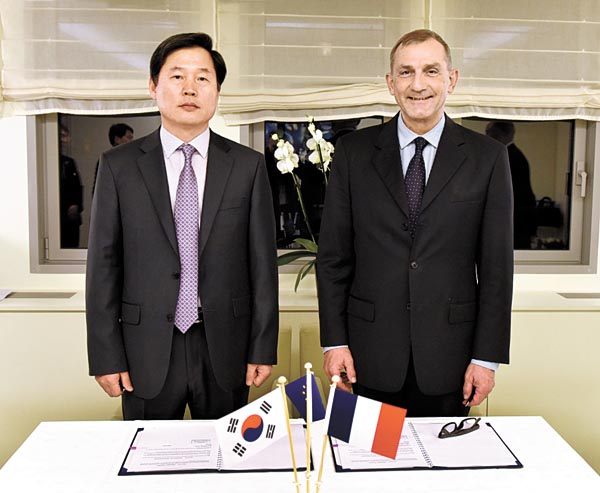 Local e-commerce companies are expected to save about 35 percent in shipping costs.

Korea Post reached an agreement with La Poste at its headquarters in Paris on Tuesday local time to begin the service as early as April.

“The new service has been especially prepared for local e-commerce companies that sell goods to Europe to shave their shipping costs,” Kim Kee-deok, president of Korea Post, said at the agreement signing ceremony. “I hope it helps boost Korean electronic exports to Europe.”

The French postal office will loan part of its logistics centers, which will be used to temporarily store parcels from Korea until they are distributed to the rest of Europe. The service speeds delivery, as all customs procedures for products to Europe are done once in France before being distributed to their final destination.

The service is expected to take a day or two more than Korea Post’s current Express Mail Service (EMS), which usually takes two to three days until the products are delivered to cities with direct flights from Seoul. However, the rate will be a lot cheaper.

Online shopping malls shipping parcels of 30 kilograms (66 pounds) or lighter can register for the new service to deliver products to all regions in Europe.

Korea is the sixth e-commerce trade partner for Europe, following China, Singapore and the United States, according to the postal agency.