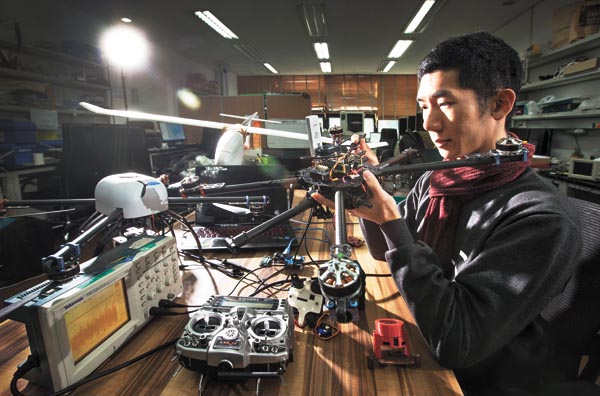 Park Won-nyoung, head of nonprofit Angel Swing, works on a drone in the laboratory of the Seoul National University’s robot club, the Sigma Intelligence Club. Park hopes that his drones can help disadvantaged people around the world.

The world is changing fast, especially the IT industry. Drones, or unmanned aerial vehicles, in particular have been growing as an industry. Earlier this year the Consumer Electronics Show in Las Vegas showcased the latest technologies from around the world, including virtual-reality systems, smartcars and drones.

One young man has been putting all his effort into developing drones.

Park Won-nyoung, 25, is studying aerospace engineering at the Georgia Institute of Technology. There, Park learned about drones through the school’s Design and Build Fly Club.

Now, Park has begun to put his knowledge of drones to work. In his work, Park uses drones in unique ways, not just for photography or videography, and with the aim of helping others.

Currently he is the head of Angel Swing, a nonprofit organization that aims to help disadvantaged people through drones.

Along with his organization, Park has been involved in several projects. Recently, he cooperated with Seoul National University’s Institute for Global Social Responsibility and the Seoul Metropolitan Government to provide a map of areas in Samseong-dong, Gwanak District, southern Seoul, with a high concentration of low-income households at no cost.

Using drones that specialize in geospatial data, Park made a map that is 10 times more accurate than any other maps made by satellite or other general drones. More surprisingly, the map can give an exact 3-D perspective of the space with details of the surroundings. 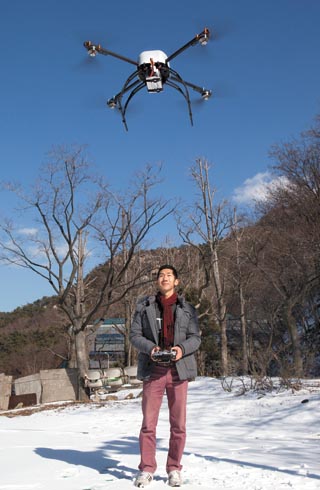 Park Won-nyoung tests one of his drones. [PARK SANG-MOON]

From urban planning, Park is moving on to smart farming. Making use of the advantages of drones, he is hoping to increase the competitiveness of the agriculture business.

For this project, Park is developing a bird control drone. This is meant to deter birds without causing damage and is controlled by smartphone or tablet. Furthermore, it can fly to any designated place by itself. At a fixed time, the drone flies to the destination and lands, causing any birds to fly away. Park said it is efficient and eco-friendly in both its auditory and visual aspects.

The drone has been already tested at a farm located in Chungju, North Chungcheong. Park said the results were incredible, and the damage caused by birds was half of what it was last year.

For a long time, Park has been focusing on making drones that have both cameras and GPS so they can perform assigned tasks at any assigned place. The information collected by the cameras is compiled using open source software, allowing users to view geographical features on a map with the ability to zoom in and zoom out.

Furthermore, Park has been working on expanding the diversity of uses of drones according to differing situations.

In particular, he is interested in giving accurate information on space and its analysis.

For example, in April 2015, after the massive earthquake in Nepal, Park and his colleagues pitched in to help NGOs. The aid they provided was in the form of drones that were used to help find survivors, deliver relief supplies and provide shelters.

It had long been this young man’s dream to use his knowledge of technology to help disadvantaged people. He had also long wanted to help people working in disaster areas. Therefore, his dream came true through his efforts in Nepal. 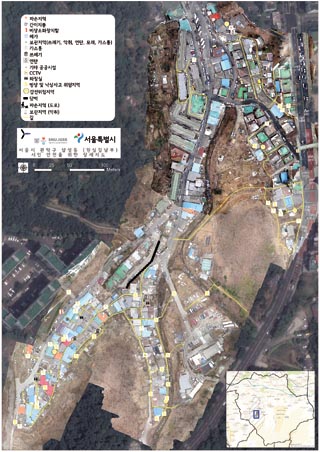 A map made by Park using GPS drones that shows Samseong-dong, Gwanak District, southern Seoul, which has many low-income households. [PARK SANG-MOON]

The efforts to supply drones to Nepal was sophisticatedly planned. Through crowd-funding, Park and his colleagues raised money and then purchased necessary components abroad to help reduce expenses.

The machines such as 3-D printers and other basic equipment were borrowed from the Seoul National University’s robot club, the Sigma Intelligence Club, which helped the group save time and money.

These days there are many exemplary people in the IT industry such as the late Steve Jobs of Apple, Jack Ma of Alibaba and Mark Zuckerberg of Facebook. This energetic young man might be the next such person in the industry, as his drones take to the sky to help others.