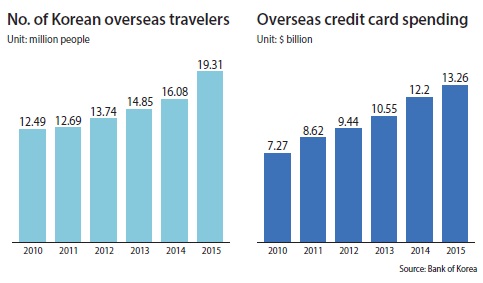 In contrast, the Middle East Respiratory Syndrome outbreak in early summer resulted in less spending by foreigners traveling to Seoul, for the first time in 12 years.

According to the Bank of Korea on Tuesday, the total payments from cards held by Korean residents but made outside the country stood at $13.26 billion last year, up 8.7 percent from a year earlier.

The figure includes all payments made by credit cards and debit cards.

On the other hand, foreigners’ card spending in Korea recorded $10.48 million in the same year, falling 13.2 percent from the previous year.