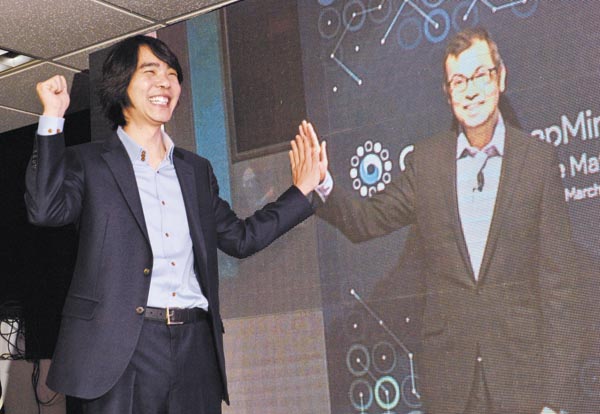 Professional Go player Lee Se-dol, left, who has the highest Go ranking of ninth dan rank, matches his hand with Demis Hassabis, the CEO of Google DeepMind, through a video connection during a press briefing held by the Korea Baduk Association and Google DeepMind on the second floor of the association’s building in Seongdong District, eastern Seoul, on Monday. Lee will go head to head next month against DeepMind’s artificial intelligence system AlphaGo. [KIM HYUN-DONG]

“I heard the program is getting better at Go by the day, but I think I can manage to win the match this time,” said Lee Se-dol at the press briefing held on Monday by the Korea Baduk Association.

Go, also called “baduk” in Korean, is a complicated board game in which two people compete to occupy more of a board with either black or white stones. The game has long been a challenge for computer programmers, who see it as one of the ultimate tests of an AI system’s capabilities.

Each match will be played without handicaps and under Chinese rules.

The grand prize is $1 million.

Lee turned pro at 12 years old, and has won 18 titles from tournaments around the world. He is currently recognized as one of the best Go players in decades. He acquired ninth dan, the highest rank in the game, in 2003.

Lee and other experts say the program skills are still lower than the best human Go player, which should give Lee the advantage. But all acknowledge they can’t guarantee a victory for Lee because the system can evolve its abilities on its own through self-learning.

“It’s hard to forecast the exact outcome of the match, since no one knows how much the program will evolve over the six months after the match with the European champion,” said Yoo Chang-hyuk, a ninth-dan Go player and coach of Korea’s national Go team.

Over the past several decades, AI has triumphed over human champions in a few noted occasions.

Back in 1997, IBM’s chess-playing AI system Deep Blue defeated Garry Kasparov, who was then considered the best player in the world.

Yet AlphaGo is more advanced than either of these systems because it continuously improves its skills by playing itself in random games, making it more adaptive and competitive against a human player. Others could only memorize and mimic the moves of experts.

The outcome of the match will only be decided in March, but in the meantime, many are asking themselves who they ought to be rooting for.

Some are hoping that AlphaGo triumphs, because its victory would mean a huge step forward for AI technology, representing a host of exciting new applications.

But others still want to believe there’s something special about humans that cannot be replicated by computers.

“I hope Lee Se-dol wins this match to show the world the mystery of human intelligence,” said Park Chi-moon, vice chairman of the Korea Baduk Association.

In the end, “this match will open up a new chapter in the history of artificial intelligence regardless of the actual outcome,” said Jeong Jae-seung, a professor at the Korea Advanced Institute of Science and Technology.