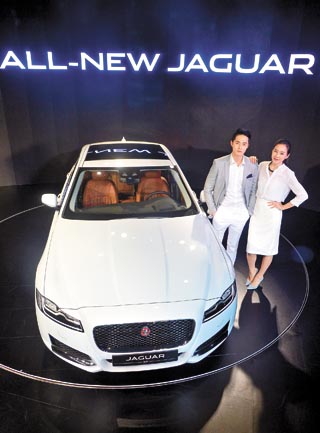 British carmaker Jaguar showcased its all-new XF - a version of its original 2008 model - at the Banyan Tree Club & Spa Seoul, Jung District, central Seoul on Tuesday. The release is expected to ignite more competition in the luxury sedan segment where its German competitors, the BMW 5 series and Mercedes-Benz E Class, have established a stronghold. The new XF model is about 190 kilograms (418 pounds) lighter than its predecessor as more than 75 percent of its body is aluminum. Another notable feature is the widened interior space of the car. The carmaker has lengthened the wheelbase of the car to give more space in the back seat. The model comes in seven lineups and the price ranges from 63.8 million won ($51,782) to 99.2 million won. [NEWSIS]