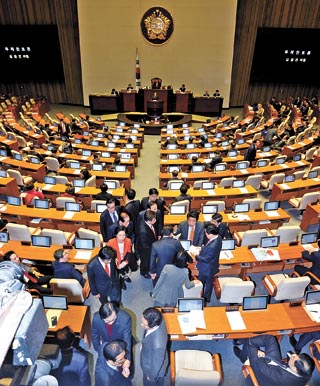 The ruling Saenuri lawmakers leave the floor as Rep. Kim Kwang-jin of the Minjoo Party starts Tuesday evening a talking filibuster to the voting on the counterterrorism bill. [NEWSIS]

The main opposition launched a filibuster Tuesday night against a controversial counterterrorism bill, following the National Assembly speaker’s decision to use his power to introduce it to a vote.

The National Assembly began its plenary session at 6:50 p.m. following a series of delays as the main opposition Minjoo Party continued to protest National Assembly Speaker Chung Ui-hwa’s decision to call a vote on the counterterrorism bill, sponsored by the ruling Saenuri Party.

Shortly after the session began, Chung introduced the bill and the Minjoo Party started an organized filibuster attempt with Rep. Kim Kwang-jin as the first speaker.

Chung said he decided to arrange the vote because the ruling and opposition parties had repeatedly failed to reach an agreement, as escalating threats from North Korea had resulted in a national emergency. Shortly after the bill was introduced, Kim began his speech and Saenuri lawmakers left the floor.

Since the Sept. 11, 2001, terrorist attacks in the United States, the ruling and opposition parties and the government have repeatedly attempted to create a counterterrorism law. No vote, however, has ever taken place due to concerns from lawmakers that it would yield too much authority to the National Intelligence Service (NIS), which time and again has involved itself in domestic politics.

The Park Geun-hye administration and the ruling Saenuri Party recently renewed their push, citing escalated threats from North Korea, but the Minjoo Party repeatedly rejected the plan. The latest bill, proposed by the Saenuri Party, seeks to establish a counterterrorism center inside the Prime Minister’s Office and give the NIS the mandate to collect information.

National Assembly Speaker Chung said early Tuesday morning that he would use his authority to arrange a vote on the long-delayed counterterrorism bill at a plenary session, scheduled to open at 2 p.m. The previous day, Chung summoned NIS Chief Lee Byung-ho and was briefed on the latest assessment in terror threats and the law’s necessity.

Following the speaker’s announcement, the Minjoo Party convened a general assembly of its lawmakers where they decided to put a stop to the vote. “The anti-terrorism bill will allow the NIS access to financial information and [give it] almost unlimited power to eavesdrop and wiretap,” said Rep. Lee Jong-kul, the Minjoo Party floor leader. “This will be a curtain-raiser for [the Saenuri Party’s] long-term seizure of power, and we must stop it at all costs.”

Rep. Lee Mok-hee, the main opposition party’s chief policymaker, proposed a filibuster as a means to kill the bill. Lawmakers created a plan to continue the debate until midnight March 10, the final day of the session. They said it would take five hours for each lawmaker to speak for the next 15 days to kill the bill.

Article 106-2 of the National Assembly Act, governing the implementation of unlimited debate, gives a lawmaker the right to start a filibuster, an item referred to the plenary session without any time limit, if he or she submits to the speaker a letter of request signed by at least one-third of all incumbent National Assembly members. The Minjoo Party currently occupies 108 seats in the 300-seat legislature. Ending the debate will require a consensus of 180 lawmakers. The Saenuri Party currently has 157 members.

While the country’s Constitution also guarantees lawmakers’ the right to filibuster bills, the National Assembly Act, revised in 1973, limited a lawmaker’s remarks to a 45-minute maximum, effectively killing the procedure. Current filibuster procedures returned to the legislature when the act was revised again in 2012.

Since the new filibuster system was introduced, the main opposition party once requested unlimited debate after President Park Geun-hye sent a motion agreeing to Hwang Chan-hyon’s appointment as the head of the Board of Audit and Inspection. The request, however, was rejected by the Assembly’s speaker at the time, who cited that it was a tradition of the legislature not to allow a debate to protest an appointment.

Tuesday’s filibuster was the first since the new system was introduced.

Rep. Kim, who kicked off the filibuster, stated that Chung had no reason to call the vote because it was not a time of national emergency. Chung has been a fair and reasonable speaker, he said, though the president’s high-handed, one-way attitude had now forced its way to the head of the legislature. The People’s Party, a minor opposition party created by Rep. Ahn Cheol-soo and more than a dozen former Minjoo members, said it would cooperate with the main opposition’s filibuster. The People’s Party had earlier said that it opposes the Saenuri-sponsored counterterrorism bill because it infringed upon the people’s basic rights.

The party currently has 17 lawmakers and may join the Minjoo’s representatives in the filibuster.