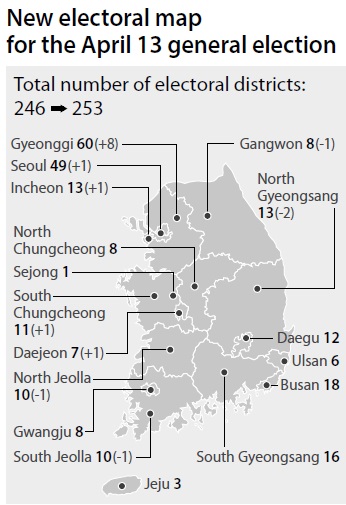 The ruling and opposition parties finally agreed to a new constituency map on Tuesday, with less than two months left until the upcoming general election in April. The redistricting plan will be approved at a voting session on Friday.

Ruling Saenuri Party Chairman Kim Moo-sung and his counterpart in the main opposition Minjoo Party of Korea, Kim Chong-in, signed an agreement on new standards for the constituencies Tuesday morning.

National Assembly Speaker Chung Ui-hwa also signed the agreement and asked the National Election Commission to create a new electoral district map based on the standards by Thursday. A bill reflecting the new map in the election law will be up for vote at the main session on Friday.

The agreement at last ended uncertainty over the constituencies for the country’s elections, particularly the April 13 general election. As of Jan. 1, 2016, the existing map became invalid by order of the Constitutional Court, but lawmakers failed to agree on a new map, as negotiations were repeatedly stalled over the passage of unrelated bills.

The Constitutional Court ruled in 2014 that the current electoral map resulted in unequal representation due to population changes. The court gave the legislature until the end of 2015 to fix the map, with the mandate that the ratio of the most populous electoral district to the least populous be lower than 2 to 1. The current ratio is 3 to 1.

Of the 300 seats in the National Assembly, 246 seats represent single-member constituencies, while the remainder is allotted for proportional representatives.

Under the new electoral map, the total number of seats will remain at 300. The ruling and opposition parties agreed to increase the number of single-member district seats by seven and reduce the number of proportional representatives by seven.

In the upcoming general election on April 13, 253 lawmakers representing their own constituencies will be elected, and 47 proportional representatives will be selected.

With redistricting done based on the population as of October 2015, Seoul will gain one more electoral district, bringing the total to 49. Gyeonggi will have 60 districts by gaining eight, and Incheon will have 13 by adding one.

The provinces of North and South Jeolla will each lose one district; Gangwon will lose one and North Gyeongsang will lose two.

The agreement came as the ruling Saenuri Party backed off from its demand that the long-delayed counterterrorism bill be voted on at the same session as the election law revision bill. The main opposition Minjoo Party has strongly protested the counterterrorism bill, concerned that the current proposal will unnecessarily increase the National Intelligence Service’s power.

“I cannot understand the Minjoo Party’s persistent opposition to the counterterrorism bill and other economic bills, but I agreed to the election law revision because the election schedule must no longer be hindered,” Saenuri Chairman Kim said.

The minor opposition People’s Party, led by Rep. Ahn Cheol-soo, said it is belated but fortunate that the main parties agreed to a new electoral map.

“The people must have realized the evils of the two parties,” said Kim Jung-hyun, spokesman for the People’s Party, which occupies 17 seats in the National Assembly. “The idea of bargaining the passage of contentious bills by taking the election map hostage is just wrong.”

The minor opposition Justice Party, which currently occupies five seats in the National Assembly, criticized the new standard agreed to by the ruling and opposition parties.

“The Justice Party was excluded throughout the entire process of negotiations to decide on the election rules,” said Han Chang-min, spokesman for the party, which has one single-member district lawmaker and four proportional representatives.

“Without any measures to reflect the diversified opinions of the people, the two major parties stole the number of proportional representatives and added them to constituencies where they have advantages,” said Rep. Jeong Jin-hoo, floor leader of the Justice Party. “The Constitutional Court’s order to realize the principle that all votes are equal was put to shame, and the two parties once again protected their vested rights.”