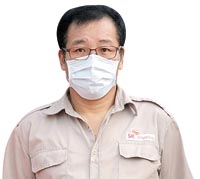 A kidnapped Korean sailor was rescued Tuesday by the Nigerian navy off the shores of West Africa some 12 days after an oil tanker was hijacked by pirates.

The 7,600-ton tanker was attacked by pirates in international waters off the coast of Cote d’Ivoire on Feb. 11, according to the Korean Ministry of Foreign Affairs on Tuesday.

There were 18 crewmen aboard the Panama-flagged Maximus, owned by a company based in the United Arab Emirates and chartered to a South Korean shipping company. They were all taken captive aboard the vessel.

The Nigerian Navy conducted an overnight rescue mission on Saturday and rescued 16 of the crewmen. They included Chinese, Pakistani, Sudanese and Ghanaian sailors. One pirate was shot and killed in the rescue operation, which resulted in a shootout.

While some pirates were captured by Nigerian authorities, others escaped, taking hostage two of the sailors on another ship. The Nigerian and Ghanaian mauraders were after the tanker’s 4,700 tons of diesel fuel, The Associated Press reported. The Maximus was exited back to a port in Lagos, Nigeria.

Korea’s Foreign Ministry said it cooperated with its embassies in Ghana, Nigeria and Cote d’Ivoire, as well as the foreign and defense ministries in those countries, to safely rescue the kidnapped crewmen.

The Korean sailor was rescued Tuesday by Nigerian naval officials and arrived in Lagos.

Rear Adm. Henry Babalola, the chief of Nigeria’s Naval Training and Operations, said Monday that the rescue operation was coordinated from the naval headquarters in Abuja, according to Nigerian media. Three Nigerian naval ships were deployed to track down the hijackers.

During the rescue process, the hijackers refused to surrender even after spotting the Navy and “opened fire on the security agents,” he said.

Babalola commended the navies in the neighboring countries for their support.

The oil tanker, built in 2007, has been hijacked three times over five years in the Gulf of Guinea. The vessel previously went by the name SP Brussels. One crew member and two pirates were killed in May 2014 after the tanker was hijacked by pirates in waters near Lagos.