After surgery, Dodgers’ Ryu prepares to retake the mound

After surgery, Dodgers’ Ryu prepares to retake the mound 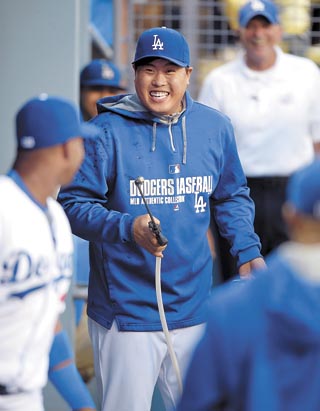 Ryu Hyun-jin of the Los Angeles Dodgers is preparing to get back on the mound after missing the 2015 season due to shoulder surgery. [JOONGANG PHOTO]

Pitcher Ryu Hyun-jin is healing up and preparing to represent the Los Angeles Dodgers once again this season.

Ryu threw a light bullpen session on Tuesday during the Dodgers’ spring camp at Camelback Ranch in Glendale, Arizona, while the Dodgers manager Dave Roberts, pitching coach Rick Honeycutt and Andrew Friedman, the president of baseball operations, looked on.

“I can tell his condition is getting better each day,” said Honeycutt. “I know he still has a long way to go but it is obvious that Ryu is working hard. This is a positive signal for the team.”

Ryu threw about 30 balls on Tuesday. Although it was just a light bullpen session for Ryu, his ball recorded 135 kilometers per hour (83 miles per hour).

Ryu threw his first session of the season on Feb. 19, which was also his first time back since his shoulder surgery in May 2015. After his second practice on Tuesday with three days of rest, Ryu said, “I think I pitched a lot better today than last week. Pitching speed and form are definitely improving. I am making progress.” MLB.com also reported on Ryu, commenting how his performance pleased Dodgers manager Roberts and Friedman.

In his interview with the LA Times, Roberts said about Ryu, “He’s certainly behind. And that’s by design, in the sense that we don’t want to push him.” Ryu is expected to make an appearance in the spring games, but it is doubtful that the Dodgers will play him in the first week of the season, from Apr. 5 to 7 against the San Diego Padres. Roberts said its unrealistic to expect Ryu to throw 200 innings straight away.

Ryu played in 192 innings when he made his debut with the Dodgers in 2013. He logged 152 innings the next year. He has 28 career wins and 15 losses with a 3.17 earned-run average. Ryu was unable to play a single inning last year due to his shoulder operation. The LA Times expects the Dodgers will fill in Ryu’s gap with in-house options such as Alex Wood and Mike Bolsinger earlier in the season.

Kenta Maeda of Japan also joined the camp on Feb. 21 when pitchers and catchers began their first workout. Maeda, who played for the Hiroshima Toyo Carp until last season, inked a $25 million contract with the Dodgers including $10 million per year in incentives for eight years. Maeda is projected to stand third in the pitching rotation after Clayton Kershaw and Scott Kazmir. Once Ryu demonstrates he can return to the mound, he is likely to be fourth in the rotation after Maeda.